Game day round up and Saturday musings ...

Share All sharing options for: Game day round up and Saturday musings ...

So the Old Gray Lady (as we call the NY Times out here in the right coast - no worries people, I am of course partial to the left) has U.C.L.A. (love how they pen U.C.L.A.) on its mind this morning. Actually its former UCLA beat writer from OC Register Lee Jenkins (who is now at the Times) doing up a vanilla piece on UCLA-SC rivalry and revival of Los Angeles as a total college football town. The article is well intentioned. But it has some holes.  For starters, it links "Bruins" (in fourth para.) to freaking Boston Bruins.  Yikes.  So much for respect (and research on the part of Times web staff). Also this:

The programs have regained their traditional roles, with the Trojans on top and the Bruins trying to nip at their cleats.
Uhm, not sure WTF Lee was doing during his time as a college football reporters in Anaheim (which is not Los Angeles).  Because if he was paying any attention then he would have been aware of the 8 game winning streak we rolled up on the hapless, pathetic Trojan football program of the 90s.  If he was paying attention, he would know that UCLA and USC have pretty much gone toe to toe during last 3 decades.  This "traditional roles" non-sense of us trying to "nip at their cleats" perhaps was true during the early years in the history of UCLA football (the era of leather helmets), when a brand new university was trying to find its footing, but that certainly hasn't been true since the 60s.  Lee is just pushing a MSM bandwagon meme who are having boilerplate Trojan orgasm from last three years.

Again, Trojans deserve all the accolades they are getting now. They are a great team.  But to suggest that our traditional role is to nip at their cleats, is just idiotic (Bill Plaschkish STUPID), ignorant, uninformed non-sense.

Oh another note on this NY Times piece, which has this picture and caption: 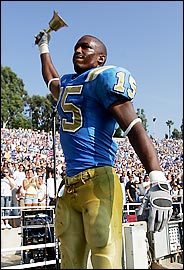 Now I love Cassel.  Great kid.  But someone (hello coaching staff) should clue the kid in that the only "victory bell" any true blue UCLA alum or student would care about is this one right here:

Get this one back (along with at least 6 more wins this season), paint it in blue and gold, and voila KD will get his "validation" from the BruinsNation.

Anyways, here are some quick news round up. Dohn zeroes in on the efficiency of our passing game vs. the weakness of Huskies passing defense.  He also compares the mindset of our players going into this game, to the one they had going into the Rice game.

Lonnie White of LA Times writes about Huskies are looking to settle their score with Maurice Drew. LOL okay whatever.

And over at Lee Jenkin's former beat, Kuwada looks into how the Bruin Defense will be targeting Husky QB Isaiah Stanback, who is right now third worst QB (in terms of passing efficiency) in the PAC-10.  Yes this game today needs to be a blowout, if the Bruins want to continue the positive momentum of first four weeks of this college football season.  Post your comments and thoughts here through the day.