Bragg Makes it Official in Dairyland

Share All sharing options for: Bragg Makes it Official in Dairyland

Craig Bragg signs his K with the cheeseheads:

Bragg, a 6-foot-1, 195-pound receiver out of UCLA, is the school's all time receptions leader with 193 career catches for 2,845 receiving yards (second all-time). He scored 23 career touchdowns (19 receiving, two rushing and two punt returns) with 12 scores of 40 yards or more. Bragg is the only UCLA receiver ever to lead the school in receptions for four consecutive seasons and also the lone Bruin to ever make at least 50 receptions in two separate seasons.
Now he can look forward to freezing to death in those Wisconsin winters and getting bruisemarks from Brett Favre's bullet passes.  Kidding Craig.  Good luck to you.  Here is to you jumping into the stands of Lambeau field: 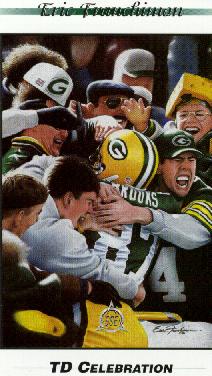