So the game time is almost set. Per the official site we are going to tip-off against Zags sometime around 6:55 pm PST on Thursday night. I have reset the countdown clock above to keep the good mojo going. Of course there is going to be lot of hype around this game. Dohn already has the storylines all set up pitting the offensive minded Zags against the lockdown Ben Howland defense. I will of course take our chances with our D. Springer for LA Times also has a write up this morning on how and why it's the Bruins who have become the trendy pick out of the Western region this March Madness season.  Yes, Gonzaga will have the MSM's anointed superstar, while are going to have our warriors leading the blue and gold: 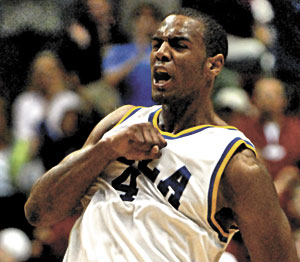 But I think there are two more intriguing story lines in this match-up the traditional media (in Los Angeles and beyond) have missed out on so far. Perhaps we will see this picked up in the media later on this week - we will see.

First I haven't seen anyone writing up exactly why the Zags became a hot program from out West starting with their "Cinderella run" with Monson and Santangelo in 1999. Those guys barely lost to UConn(victs) but made a little name for themselves as the giant killers. But they then kept it going playing through a worthless conference (WCC) full of tomato cans and cupcakes having one good (regular) season after another. Of course it didn't hurt the fact there was a huge power vacuum out West due to a sleazy, incompetent, corrupt, morally bankrupt conman posing as a head coach in the most storied basketball program in Westwood. One of the reasons Zags over the last year have gained a strong foothold out West because of the lack of a dominating Pac-10 power. Sure Zona, Washington, and Stanford have had some cute seasons - but none of them were good enough to thwart the rise of another power in West and none of those programs have the aura to rival the storied programs like North Carolina, Kentucky, and Duke from the East (I am not counting UConn(victs) as an elite program because you know they are bunch of cheaters not having any shame starting thieves and burglars starting games for few cheap wins).

Anyways ... going back to the Zags ... they sent a message out West on December 11, 1999. Not sure how many of you remember that day in Pauley - when Few's no. 24 bunch came into Pauley and humiliated a ridiculously talented no. 11 UCLA team 59-43. That's the team that had Watson, Rush, Moiso, Gadzuric, Barnes, Young ... the stable of Mickey Ders Lavin amassed during his first two years in Westwood (banking on the brand name of UCLA, which Harrick's players made relevant through the NC in 1995 and that Elite Eight run in 97). That game at Pauley was a telling marker of a humiliating/dark period under Rasputin of UCLA basketball. According to some UCLA inside observers writing in the Bruin message boards, Lavin was so clueless on the sidelines during that particular game - he didn't know at one point whether the Zags were running a zone or man-to-man defense. The stupid m'fer (I am talking basketball acumen here, not media relations) had no clue what to do as a basketball coach. Gonzaga made its mark as a program to reckon with out West that particular made, and UCLA was getting flushed down to the toilet.

Gonzaga couldn't have been a more convenient storylines for assclowns in the Eastern sports establishment based ESPN.  Here was a cute, little team from out West perfectly fitting that narrative of soft West Coast teams - doing very well in a sh!tty conference everyone can make fun off - only to get stomped by mighty big boys from the ACC, Big Least, and the Big-10 ... err the Pac-10. Zags started getting some recruits who would never even consider them ... and voila they became a big factor out West.

And, that was just the first story line. Another insider story line no one is talking about (yet) in the traditional media is the coaching match up between Few and Howland. Of course not a lot of people know Few was one of the 3-4 finalists for the UCLA headcoaching gig back in 2003. Few wanted the UCLA (and now he may be angling for the Kentucky gig). But of course Howland wanted it lot more and thank God for us end up getting it for everyone else. But this Thursday night we are also going to come around full circle in that classic way where we are going to see our head coach against the guy who might have been roaming the Pauley sidelines on the home bench. No offense against Coach Few. He is a good coach (although his kids doesn't seem to big fans of playing D) and all, but UCLA got the right man. We are blessed to get who we think is not only the NCOY of the year, but will be running for this award almost every year hereon out.

We will have a chance to end the first story line (of the Zags rise at the expense of Bruin collapse) this Thursday night (BTW it won't be the end of the world, if we don't). This whole year we have been on a crusade exorcizing the demons of those painful, dark seven years from 96 to 03. We have made Arizona and Stanford (two programs who clearly went on an upswing due to Lavin's total ineptness) our Pac-10 stooges again.  Now it is time to put Gonzaga back in its rightful place - just another cute little program from the great Northwest, who should never again go head to head against UCLA for any marquee recruit.  We need to win this game so that we can get payback for December 11, 1999. I know that was almost seven years ago - but we have built up the long memories. Yes, we are putting those Lavin days behind us. This season has been truly magical in making that happen - but this Thursday night could be just another of those seminal moments letting rest of the world know - West Coast basketball will no longer be represented by those little darlings of ESPN, but by God's built by John Wooden, and (truly) revitalized by Ben Howland.

This week is going to be excruciating counting down till 6:55 pm Thursday night. GO BRUINS.