Let’s do a quick reset before getting to extended thoughts on last night’s game. Let’s take a count on what CRN and Norm Chow were working with in one of the toughest venues in college football against one of the more talented teams in the west coast:

Basically in a sense we were fielding what might have been a scout team from this year's spring ball. And yet after all that the Bruins gave us a game, in which our hearts were beating almost to the closing mins against a team that was favored to win by almost three touchdowns on the road? So does anyone still in their right mind want to call that performance Dorrellian?

So with that out of the way, here are some thoughts on certain aspects from last night’s game. From my jotted down notes from 2 am stream of consciousness (writing down on post-its before going to sleep):

Playing to win: I have absolutely no problem with the call re. that onside kick. I find all the second guessing and Sunday morning quarterbacking of a head coach’s willingness to go for the win, after being subjected to years of timid and playing not to lose mentality that have driven us over the wall here on BN. At least here on BN we are going to appreciate a coach being fearless and going for the win. We are going to appreciate a head showing complete faith on his entire team (including on a defense which might be finding it’s away) in the most crucial moments of the game.

I haven’t seen any specific data points re. success rates on onside kicks.  The only statistics I was able to look up this am was from the wiki entry pointing the 2004 success rates in the NFL which was around 24 percent. That is not very high. But it is probably not a reach to assume that success rate is a bit higher when it on side kick comes in a situation when the opposing coaches are least expecting it (would love to see some data points on that).

[UPDATE] silverlakebruin with a solid find re data points re success rates of surprise onside kick:

[T]he success rate of a surprise onside kick, one that happens prior to the fourth quarter, is 71 percent from 1997 through 2006.

Also, couple of more factors to consider in what kind of risk/rewards analysis CRN might have done to make that decision.  Until that point of the game (except for that last drive to end the first half and Masoli’s early success in the first quarter), UCLA’s defense was adjusting pretty well. They were throttling the passing attack. I don’t think it was unreasonable for CRN to assume that even if we didn’t recover the onside kick, our defense would be able to contain Oregon’s offense to a 3 point FG (which they did after Craft’s interception resulting from TA’s scary injury). Another factor to consider, given how we have been unable to kick it deep all season routinely giving up great field position, giving up good field possession on a surprise onside kick, wasn’t really the end of the world.

In any event, it didn’t work out due to a bad call (although the bad calls evened out in another badly officiated Pac-10 game). But I am not going to second guess CRN’s decision to be aggressive and play to win by showing his faith in his young team. I love that kind of aggression and eventually balls are going to bounce our way in the coming years. This is what makes football fun.

Sticking with Craft: Speaking of second guessing, after sleeping on it, I am not finding a lot of reason to clamor for a QB change. CRN and Chow are working with what they have right now in Kevin Craft. KC to this point of the season has completed 59 percent of his passes for 1233 yards with 5 TDs and 6 picks. Yes, he had a lot of Vinney Testeverde moments from his Tampa Bay days last night. Yes, we were holding our breath at times when he was throwing it underneath. But we have to ride this out with him (even if he can’t throw deep). The cold fact is that despite being at UCLA for one extra year and having full opportunity to compete for this job since last spring, Chris Forcier hasn’t been able to charge up the depth chart (at times falling behind true freshman Kevin Prince).

Also, I can’t fault the coaches for not wanting to burn up Prince’s redshirt season unless they are totally desperate. Even with Craft’s at times erratic throws, we have been hanging in there except for one and half football games (BYU and late second half against Zona) this season. I don’t mind that all too much.

Moreover, think out loud a little bit before getting frustrated over Craft not being able to go deep last night. The Ducks’ defensive frontline was at times pile driving our OL with a 3 men rush. Jake Dean (who is giving it all he has at center) was getting driven into the turf. Baca was getting terrorized (not too surprisingly) by all Pac-10 DE like Nick Reed.  It’s not like Craft had time to settle down and pick apart the Duck’s defense. He got sacked 6 times and hurried countless others. So considering the circumstances, I think he did what he could and at this point, I am going to put my complete faith in the combination of Neuheisel and Chow in their managing of Craft and UCLA’s QB position until it gets settled in next couple of years.

IIRC (haven’t reviewed the tape) KC rolled out to his right and had a little bit of real estate to gain perhaps 3-5 yards. Instead he rolled it and flinged it for an incomplete pass. I think that is where it went wrong. If KC had just tucked it in (similar to a decision he didn’t make against Zona and couple of other occasions last night) and gained 3-5 yards using his feet in that play, he would have made the situation much more manageable on 3rd down. I understand even if he ran, Oregon would have taken a time out, but it still would have made the situation manageable. And I think the roll out is designed to give him the option to make the decision between going up for positive yardage and completing to an open receiver. He made the wrong call in that split second. It happens for a first year QB (Cade made lot more bonehead mistakes in his first two season, not just his first season). But those play calls by no means were bad clock management on the part of UCLA’s coaching staff.

Running back rotation: I think this is where we have some rooms for raising questions re. personnel decisions. No doubt Kahlil Bell is a warrior. The kid is giving everything he has out there but at some point the coaches need to ask the question whether it would be more productive to go with Coleman and even Dean. The only explanation I can think of coaches not trying out Dean as much is probably because he is still learning to pick up blitzes (which right now is essential given the precarious state of protection our QB is getting from the OL). Kevin and his OL need all the help they can get and if that means going with the experience of Bell (despite being wobbly) or Coleman (due to his size) over Dean, that is understandable. But in terms of getting reps, I wouldn’t mind if I see more of Coleman over Bell.

The kid runs with aggression: 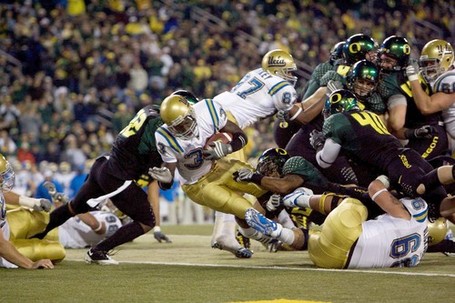 Photo Credit: Craig Mitchelldyer / US Presswire (via the LA Times)

Also Moline is really coming into his own at FB and at least to this 49er fan bringing up fond memories of Tom Rathman.

Defensive adjustments: The final score doesn’t show it. The rushing totals for Oregon is cringe worthy. Still, I thought Walker coached one of his better games as UCLA DC last night. I was very impressed with the way our defense adjusted after getting stomped early on by Masoli’s read option play. Ayers  finally had his much anticipated coming out party as a starter. I love this kid’s game and I think the way Walker has slowly worked him into the starting rotation is a very encouraging sign.

The question remains around the issue of tackling. Brett Lockett once again had a glaringly tough night (no hiding from the highlights on what Masoli did to him). But what can Walker really do? Replace him with Ware who was not all that effective against Tennessee? There is not a lot of options he has right now except to burn the red shirt years of E.J. Woods or try out someone like Love. But I rather have those kids red shirt and get physically ready for next season, instead of exposing them to D-1 speed and ferocity as a true freshman. Ask any Washington fans about how Willingham has ravaged his depth chart by burning through his freshmen’s redshirt seasons. Again, I don’t really have any answers here except for hoping that somehow Lockett will be able to get it together rest of this season.

Still, give all the adversity this team has gone through (outlined at the very top of this post),  I am feeling pretty good about where we are as a team. After the massacre in Provo, I am seeing unmistakable progression on both sides of the ball from game to game. The game to game improvement will still likely not result in a winning season, but now more than ever I am confident we are headed towards the right direction.

Now the challenge remains is to build on the positives. One of the more encouraging aspects from last night’s game was Watson’s sideliner report that the offense was upset even after scoring the final TD to make the game close in the waning mins. I like the fact that the team wasn’t smiling or hamming it up after a moral victory, instead showing the same kind of angst and frustration we kept seeing in the faces of AA and JF in their first season at UCLA. This is going to take a long time but now after few weeks, the signs are there that this team is taking one positive steps after another. Hopefully they will have a chance to take another a big one by flipping the scoreboard in our favor next Saturday.