Share All sharing options for: Ben Ball Roundup: Start Of the Warrior Season

We have been waiting long enough for this: 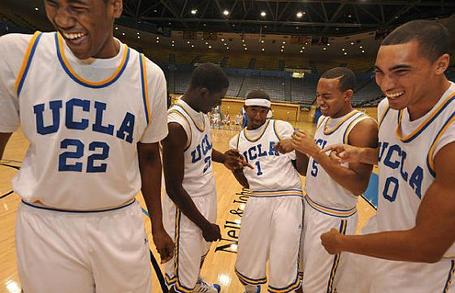 As usual the players fired up and ready to go with boilerplate expectations in Westwood. Brian Dohn reports on how freshman JH was reading off the same script from DC, the senior leader and most likely preseason All American this season:

[A]s Bruins veterans and neophytes gathered for Wednesday's media day, the theme remained the same, even if the skill level and chemistry is a question.

"What should be the expectations of this team? National championship," said freshman guard Jrue Holiday from Campbell Hall of North Hollywood.

UCLA senior Darren Collison, who is looking for a fourth Final Four trip in four years, said he believes the ingredients exist for another deep run.

"The only reason it's hard for people to see it is because we lost the last three years in the Final Four," Collison said. "I've got one more year to do it, and that's what I'm going to do."

Well the players talked up the usual expectations (which Pucin (already in mid season hack form) printing expectation as "prediction") for this season. But once again Coach Howland walked everyone back and reminded the challenges facing this year’s Bruin basketball squad:

But listen to Howland, and winning the Pac-10 sounds just as tough as ever.

"We'll be picked to win it," Howland said with a nod to their history. "But it means nothing," he added, pointing to a thin squad of just 11 scholarship players, two under the limit.

In addition to the thin squad, Coach Howland will have number of other challenges to deal with this season. One of them will be to get most out of an inexperience and young frontcourt thanks to departures of KL, LRMAM and LMR. Howland specifically pointed out the need for AA2 to provide decent mins this season:

"We have to be able to rebound," Howland said, with a nod to the rugged Aboya, who committed a foul every 6.1 minutes last season and must give the Bruins about 25 minutes each night.

How concerned is Howland? Every time Aboya commits an unnecessary foul in practice, the whistle will blow, as it did the other day in a preseason workout, with the whole team ordered to run.

The point: Dumb fouls hurt the team. If he commits them, the whole team pays.

Meanwhile, the whole team is still a work in a progress in terms of getting healthy. It appears after two years, JS is finally starting a season in good shape:

Shipp appears to have had a full-body summer makeover. He said he weighed 210 pounds after weighing as much as 223 last year, and Howland said Shipp worked out hard this summer with Jordan Farmar.

Shipp said he benefited from concentrating on getting physically fit instead of rehabilitating from hip surgery, as he did in each of the last two years.

However, ND and MR are still working through their injury issues:

Dragovic, a junior, had a cyst on his left foot drained recently, but said he is still experiencing pain in his foot and will undergo a bone scan Friday.

"I'm really disappointed because this is my third year in a row I won't be starting from the beginning," Dragovic said. "I'm still shooting, lifting and conditioning, so I'm working out hard."

Also, wing Michael Roll, who redshirted last season because of a left foot injury, said he has Achilles tendinitis in his right heel, but it will not keep him from practicing.

The ND injury was a bummer news considering reportedly he worked very hard this off season on his conditioning my sticking around on campus and "lifting weights, riding a bike and generally spending his time in the training room." Hopefully, he is not discouraged too much, and stick with whatever rehab regimen his doctors recommend for him to make a healthy come back from this latest setback.

As excited as everyone is about the start of another Ben Ball warrior season, I think this team will need to address few other issues (Meriones has already taken the first stab at laying out his concerns) if it wants to replicate the success from last three years. I will try to put together my notes later this week or early next week. Most of the issues I have in mind are fixable, and I have no doubt Coach Howland and his staff are all over them.

Anyway, practice officially starts tomorrow, tipping off what is the best time of the year here on Bruin Nation.