Share All sharing options for: No (Midnight) Yellin', Just (Ben) Ballin' In Westwood

It’s a huge Friday night at ESPN. They are all gearing up for Midnight Madness. It all works out so perfectly for the MTVized sports culture at WWL. Eamonn Brennan at the Dagger, Yahoo.com’s blog gives us a little sampling of some of the circus going on around the country tonight:

Tonight at midnight, teams across the country will be doing some version of Midnight Madness. (A few teams also did this last week, because they don't care about the sanctity of the Madness. For shame.) The events vary in name: "Hoosier Hysteria," 's "Tubby's Tipoff," 's "Night of the Grateful Red" and so on. The names are eclipsed in silliness only by the things the coaches have to do in front of the student body -- things like rising from caskets (Billy Donovan) or riding in on motorcycles (Tom Izzo) or doing the Soulja Boy (Jerry Rice, countless others).

HT to moutekicksboute for pointing us to that post.

As he noted we are not going to have any of that midnight yelling circus "madness" in Westwood. Instead we are just going to have some good old fashioned, old school hoops practice.

Yes, the first Ben Ball practice of the season gets started tonight (at 8 pm PST) at Pauley and CBH is having none of that silliness.  Howland and his staff will run their first practice for our Ben Ball warriors tonight from 8 to 11 pm in a "locked down" Pauley. From the LA Times (emphasis added):

Howland has never embraced the idea of Midnight Madness, which makes the first day of NCAA-sanctioned team practices more like a televised recruiting show than a workout. What Howland wants when practice is officially allowed is, well, practice.

"There's not much time until the first game," Howland says. "I don't want to waste a practice."

Just what we expect from the Caretaker of Westwood.

The message couldn’t be more crystal clear from a program that belongs to John R. Wooden. Basketball is lot more than just a game when you put on these four letters: 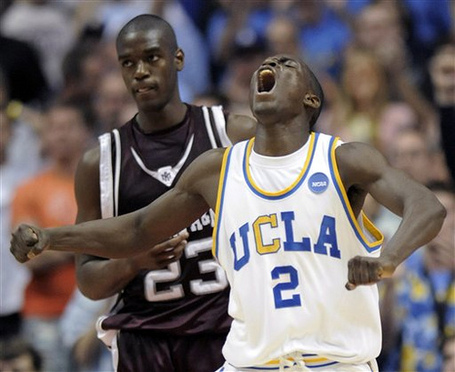