Earlier in the week Achilles called this game out as a "must win." I thought this was one of the more winnable games left on our schedule, but I hesitated to call it out as a "must win" not because I didn't have confidence in our young players but more out of respect for the solid program Harbaugh is methodically putting together up in Palo Alto.

But guess what ... I think we are starting to see clear signs ... that our head coach is not to far off in slowing putting together foundations of his own solid program.

Rick Neuheisel's "relentessly" positive gutty young Bruins pull out another heart stopping win at the Rose Bowl. Bruins go on a clutch drive to pull out a game in which Craft somehow transformed from Ryan Fien/Rob Walker to Cade McNown thanks to young starts like Rosario: 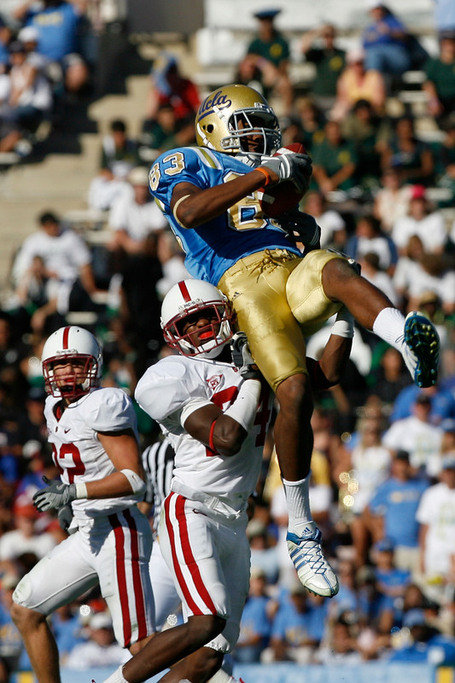 That's right Nelson Rosario had his official coming out party (4 huge receptions for 71 yards) this afternoon at the Rose Bowl. Here is the box score from our 23-20 homecoming thriller. Along with Nelson other heroes include Austin, Embree, Moya, Love, Price, Harwell, and as mentioned above Kevin Craft.

Despite the incredible win and the exhillaration as Craft pointed out himself, there are lot of issues this young team needs to work on heading into rest of the season. They have an incredibly difficult game coming up next weekend up in Berkeley. We will have lot more on the issues our team has to address on all sides of the ball (including our special teams).

The challenge for these gutty Bruins will be to followup this gutty win with another gutty performance next weekend on the road. Just keep fighting, scratching and clawing away.

Oh ... and I pointed this out in the comment threads ... CRN is now 2-0 in that blue sweater vest. With that I will leave up to rest of you to soak in the resiliency of our Gutty young Bruins.

Thread it up in our post game victory thread.