What To Think: Cal Postgame Thread

Share All sharing options for: What To Think: Cal Postgame Thread

Not for the first time this season, I truly don't know what to think about this particular team. I know that I like the direction of the program, but the day to day (or even play to play and drive to drive) mood swings are simply confusing. Prior to the game, the final score (41-20 Cal, Box Score Here) might not have sounded all that unusual. At certain times during the game, during one of our 6 3-and-outs, perhaps, the final score would not have sounded unusual. When Cal was piling up disgusting amounts of yards on the ground (234 to 16) or Craft was throwing one of his four picks (2 of which returned for TDs), it seemed like 41-20 was inevitable. 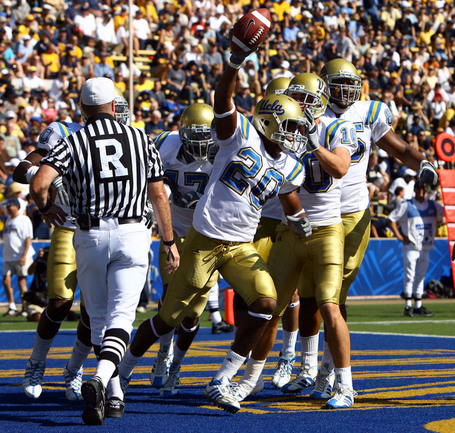 Yet, this was a one score game through all but the final quarter. Am I supposed to be encouraged about our guys somehow being within striking distance despite what seems like awful numbers going against us? Obviously there's disappointment here, but is the disconnect between the play on the field and the scoreboard throughout most of the game a sign of encouragement or just another reason for frustration?

In any case, I thought it was a pretty good game for the defense, especially Brian Price, and ATV made quite a few good plays by my informal count. Taylor Embree and Dominique Johnson have shown the ability to step up. The rest of the offense, well, we've gone over that before. We were worried near the end that losing the ToP battle early in the game would come back to bite us, and those fears ended up being rational.

We have seen flashes of brilliance from both units this season, the defense a little more than the offense. Can this team pull it together this year? Again, I don't know what to think about that.