Lot’s of injury related news to talk about on this Hump Day during a bye week. We will start with the latest on Ben Olson. Olson "accelerated" his workout at practice yesterday. Kevin Pearson from the Press Enterprise has the latest on former Bruin QB:

Olson had a doctors appointment late Tuesday and was unavailable for comment but did do some light workouts early in practice and threw in some individual drills.

"He's been cleared to accelerate what he's doing, but I'm not sure if he's ready," Neuheisel said. "He'd like to get into the fray a little bit."

Olson broke the fifth metatarsal in his right foot in April and then again the first week of training camp in August and had a pin inserted each time. He was expected to miss eight weeks but has been hampered by some lingering soreness in the foot, which pushed his return to the field back.

Olson, a former No. 1 national recruit out of high school, has missed playing time at UCLA because of hand, foot, head and multiple knee injuries and has started just 10 games.

While Neuheisel didn't sound optimistic about Olson being prepared to play on Nov. 8 against Oregon State, he worried how long it would take Olson to get up to game speed. Neuheisel was hopeful Olson could return to the field at some point this season.

"You work him during this week and see where he is," Neuheisel said. "He may come out and electrify the place, and who knows. In my mind, having laid off as a player myself and trying to come back up to game speed, it's a very difficult transition."

At this point a triumphant return of Ben Olson could become as compelling story as the one of John Barnes. Yet, I am not too sure whether I want to see Olson back in a game. I don’t think it’s worth it to risk more injury to this poor kid by having him line up behind our current OL. Given the status of our OL, we need a QB who is mobile and who can escape pressure. We will not get that from Olson, who will be a sitting duck behind that line. My heart goes out to Olson for what he has been through last few years in Westwood but I am not sure if it is worth it to him and our team to risk any more disastrous injuries by having him take snaps behind our current OL. Anyway, we will see how his rehab goes. I am sure the coaches will not make any move re. Olson until they get total assurance from the doctors at UCLA.

Meanwhile, the coaches are exploring "a somewhat bigger role" for Forcier:

In the meantime, the Bruins will continue to explore a somewhat bigger role for backup Chris Forcier, using his mobility as a counterpoint to Craft.

"If that's my role, I'm going to make the best of it," Forcier said. "It just puts that much more of a burden on the defense to deal with two quarterbacks who can do different things out there."

And maybe puts more pressure on Craft. Or maybe not.

"I had a few carries last game," Craft said. "I know Chris has good speed and he can run the ball and if that's another aspect that teams have to get ready for . . . "

Good to see both Forcier and Craft being open minded about the current QB situation.

Moving on some more important injury related news came out Spaulding yesterday. It looks like Baca could be ready in time for Oregon State:

Coaches are hopeful that freshman tackle Jeff Baca will recover from a strained hamstring in time for .

Neuheisel talked about reshuffling his offensive line, moving players around.

"There are no other bodies," he said. "We've just got to find the right combination against a particular opponent that gives us the best chance."

"I practiced the entire practice, but it was pretty bad," said Carter, who has 57 tackles. "Any time I got blocked, I just (stayed) blocked because fighting was only going to make it worse. I probably shouldn't have been out there, but it's hard to look at coach (Rick Neuheisel) and say, `Coach, I can't go."'

After beginning the season at middle linebacker, Carter shifted to the weakside when Kyle Bosworth suffered a knee injury Sept.13.

UCLA has a bye this week, which should give Carter more time to heal.

That is just painful to read. Crossing fingers and hoping for the best news at this point.

Lastly, we will end this round up with a note on Roby Toma, the latest recruit to commit to UCLA. I guess folks are curious re. the coaches’ reasoning behind offering a 5-9 ¾ , 160lb receiver from Punahou a UCLA scholarship. Well let’s look at some of the highlights flagged by Brian Dohn:

Brandon Huffman from Bruin Report Online and the West Recruiting Manager for Scout.com posted the following report on how the Toma offer materialized from UCLA coaches (article not behind the subscription firewall at the time of this post)

Hilliard, who committed to UCLA on Monday, had his tape watched by the UCLA coaching staff as they debated offering him. While watching the film, the Bruin coaches noticed a smaller receiver constantly making plays.

"Coach (Norm) Chow said he was watching our tape from our game in (at the Emerald City Kickoff Classic) and they were watching and they kept seeing me making plays," said Toma. "They had asked around about me and then it came out of the blue."

"It" was an offer from UCLA that floored Toma.

"Coach Chow is one of the best offensive minds ever in the game and when he called me to talk with me, it meant a lot. It was surprising and I was kind of speechless," said Toma. "I then got to talk with Coach (Rick) Neuheisel he told me that they have a scholarship for me and they were offering me a scholarship to UCLA."

I will never be a scout and I have no desire to be one. But what I see in those highlights is a kid who has pretty solid game speed and vision. I get that folks are concerned about his size. That’s a legit question. However, I do think it is reasonable to give deference to the judgment of Chow and Neuheisel re. offensive talents.

Also, this point has been made few times in the comment threads already but its worth repeating on the home page. Not every commit is going to be a 4 or 5 star recruit. If we can roundup a good core of athletes with elite level athleticism with some kids with great hear and leadership ability, it might result in a well balanced class. Re. the point on leadership here is Dohn:

He is also a kid that could go to and play for Army, which is a huge deal. It is a very difficult place to get in to, and speaks of the high quality of an individual. UCLA is a program that needs more leadership, and Toma could be a guy like that.
In addition to playing receiver, he could excel on special teams. Sometimes, size and 40 times do not tell the whole story, and I believe that is what UCLA is thinking in recruiting Toma.

Anyone remember who was the last kid to play for UCLA football with a service academy background? Here is a reminder: 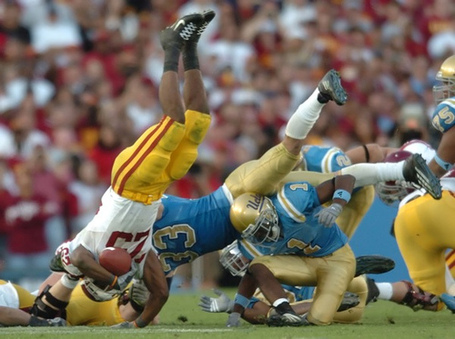 If Roby can bring the same kind of leadership, heart and desire of number 33, it will bode well for our football program.