Share All sharing options for: Spaulding Roundup: Ready For A True Blue Weekend

It was 17 years ago when tasser and I were hanging outside Moore Hall getting ready for Bio-5 (my first class at UCLA) looking at all the pre meds lining up to run for their front rows. The Professor started the class by blasting "Welcome to the Jungle" by Guns and Roses. Why I am starting today’s roundup with that story? Well, school starts this week. And it’s also a week of adjustments for all student athletes and especially freshmen student athletes, who are getting a taste of adjusting their life style balancing practices with classes and homework. It’s not an easy deal and as LA Times notes, UCLA was lucky that we have a late start tomorrow night (7:15 pm PST), giving our players an opportunity to get caught up with sleep this Friday night.

Meanwhile, the coaches have been working to keep things simple for our players, especially for Kevin Craft. Foster in today’s LAT reports that Chow to date is encouraged by how Craft has been managing the game:

UCLA quarterback Kevin Craft threw for only 81 yards against two weeks ago and 150 yards against last week. Offensive coordinator Norm Chow said those numbers are fine.

"He managed it right," Chow said. "All you have to have is a quarterback who takes care of business. He doesn't need to do anything spectacular.

"I think the plan was such he could execute better. There is a lot to be said about keeping the plan simple. We scaled it back a little bit and we were able to run the ball. Whenever you run the ball, things go a lot easier for him."

The Bruins had 234 yards rushing against .

"It opened some things up," Craft said. "When you run the ball, they can't go into a shell and just try to take away the pass."

As for his improvement from the previous week, Craft said, "Our guys up front did a good job. I'm getting more and more comfortable, but there is always something to work on and improve on."

Staying on the topic of Craft, Dohn’s report provide some explanation on why Bruin’s haven’t gone deep which includes Chow’s praise of Craft’s "good decisions":

"The game, in the first half, that's what happens when you try to force it," said Craft, who threw four first-half interceptions. "It's OK to go underneath, as long as we keep moving the chains. That's what they've been telling me. I like it when you call that stuff, and when it's not there, you just check it down."

In fact, Chow said he called plenty of plays to throw the ball down the field this season, but opponents' coverage is geared toward stopping the deep pass.

Chow said Craft is "making good decisions," and cited a play in last week's game against in which Craft's first option on the play was to throw the ball deep. However, the primary receiver was covered, so Craft wound up completing a short pass.

Right now the main deal for Craft is to completely cut down his share of bad decisions. He has made a lot of progress since that dreadful first half against . If I have it right, I believe he has thrown 1 pick since that first half. He has tried to force the action few times here and there in last couple of games, but by most account he is taking what the defense gives him. If the offensive line continues to gel, opening up running lanes for , Coleman (and hopefully Dean and Carter), it will open up more options for Craft down the line.

On the other side of the ball, Brett Lockett is struggling in the backfield. Kevin Pearson writes about Walker trying to figure out how to help Lockett in situations when he gets matched up against a skilled TE. The results have not been great to date. talks about making some adjustments, which I am assuming will result in more time for kids like Ayers (who perhaps is better suited for matching up against TEs due to his size and speed).

Lastly, speaking of speed and size the OC Register has a report on UCLA’s recruiting. Neuheisel and his staff are feeling good about where they are right now:

"I feel really good about where we are," said first-year recruiting coordinator Angus McClure.

Neuheisel has made some flashy moves, including riding in a helicopter to get to quarterback commit Richard Brehaut's game in .

He extends scholarship offers only to players capable of qualifying academically (and UCLA has the second-highest standards in the Pac-10 after Stanford). If he offers a scholarship, he plans to honor it. Because of that, the Bruins are slow to offer mid-tier talent while they still await the decisions of blue-chippers.

Karl Dorrell did not bring in recruits for official visits during the season, a practice Neuheisel has changed.

Late last month, five-star linebacker Manti Te'o took advantage of a bye week in his high school schedule, called the coaches and asked if he could visit. According to people who have talked to him since, he had a good enough impression of the campus that he now is strongly considering UCLA.

A couple of key signings by February could rocket UCLA up the charts. Adding a stellar 2009 class to the solid group Neuheisel signed last spring would give the Bruins a firm foundation for success as soon as next season.

"Personally, I think it's a good situation for him, because he can build it the way that he wants to build it," defensive coordinator DeWayne Walker said. "I think the last recruiting class gave him a start, then he can continue to build off last year's class. I think he's going to eventually get what he wants."

Read rest of the article here. I am not all that worried about recruiting for now. I like the fact that CRN and his staff are being somewhat deliberate in their talent evaluations this year, not rushing into offering mid major talents. We saw the previous regime do that early on resulting in lot of those "diamond in the rough" type recruits. If UCLA continues to get better this season and methodically develop the talent it was finally able to bring in this past season, recruiting will take care of itself on the long run. I am not too worried.

Oh, sorry my Cub friends (you are more than welcome to invoke your Cubs/Bruins mojo in the FanPost section) … But we have to do this for UCLA’s hometown team: 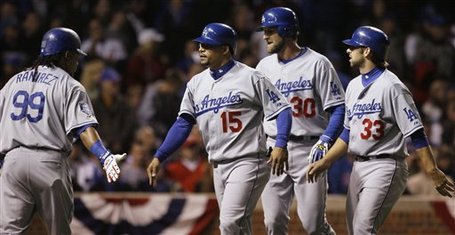 Let’s get it done this weekend boys (both at the Rose Bowl and at the Chavez Ravine). I am hoping for a perfect true blue weekend in LA.