Going into tonight's game we were a little worried.  This was the kind of game we have seen Bruin teams under previous regimes drop time after time.

This is kind of game we have seen Bruins come out in previous years and choke away, taking their opponents lightly, showing any kind of focus or killer instincts.

Instead tonight the Bruins came out with a purpose and took care of business. They started a little out of sync on offense and were having trouble tackling early in the game on defense. But they settled down and under Craft's leadership methodically sliced up the Cougars with help from Austin, Bell, Embree, Moline and Moya: 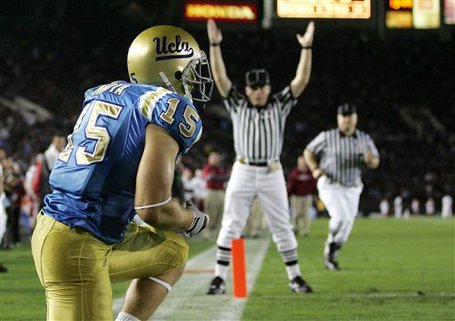 Bruins take apart the Cougars by a score of 28-3 (boxscore). The final score was not indicative of how Bruins controlled the game as Cougars piled on a TD in garbage time and Bruins had CForce mopping late in the fourth quarter.

No doubt Bruins took a step forward tonight but still there is lot of room for improvement as they head into Oregon for a very difficult road game. We will have more thoughts on the game tomorrow and early next week.

For now ... enjoy a steady Bruin win featured by an efficient and enjoyable offensive performance we haven't seen in years. Let's hope the Bruins build on it to improve some more this upcoming game week ...methodically of course.

Oh and the Blue Crew just took care of the Cubbies at the Chavez Ravine officially making this a True Blue weekend in LA.

Thread it up in our post game victory thread.