An Efficient Night At The Rose Bowl

Share All sharing options for: An Efficient Night At The Rose Bowl

The word for this Sunday is "efficient". That’s what the beat writers are using to describe Kevin Craft’s steady performance from last night. From the LA Times:

Kevin Pearson sounds off similar theme in the Press Enterprise:

Craft was efficient with his decisions, finishing the night 23 of 36 for 225 yards and a pair of touchdown passes to Moya. He connected with seven different receivers and helped direct an offense that was solid on third downs and overcame a run game that was effective though not dangerous.

As well as Brian Dohn from the Daily News:

Quarterback Kevin Craft wasn't spectacular, but was an efficient 23 of 36 for 225 yards and two touchdowns. And, almost as important, he did not turn the ball over.

UCLA's running game wasn't as explosive as the 200-plus yards it gained in last week's loss to Fresno State, but it was effective enough to rush the ball 37 times and get a pair of 1-yard touchdown runs from tailback Kahil Bell.

"It's good, but by no means are we satisfied," Craft said. "I think guys are still hungry. I definitely know I am."

Kevin’s attitude is very encouraging because that is pretty much the right mindset our players should have after pulling off an expected win against one of the worst teams in D-1.

Last night’s game against Washington State by no means was the most exhilarating or spectacular wins we have enjoyed as UCLA football fans. However, it was enjoyable and worthwhile staying up late here in the East Coast. We shouldn’t make too much out of a win against the Cougars team. However, there are certain trends, I think worth noting.

Kevin craft (as referenced above) continue to improve as Norm Chow’s latest project. From Jon Gold in the Daily News:

"It has been two weeks in a row where I thought he was really good," Neuheisel said. "He made some big plays, especially in the pocket as it was collapsing and looking downfield. Instead of looking claustrophobic in the pocket, he made some good plays. Washington State was very aggressive; it took a good job by the offensive line and Kevin hanging in there. A lot of progress has been made there."

It's the type of progress that offensive coordinator Norm Chow anticipated out of the redshirt junior quarterback. Chow said Craft, thrust into the starting lineup before the season after injuries to seniors Ben Olson and Pat Cowan, is beginning to come around.

"That's what we hope," Chow said. "He's managing the game well, and he has for two weeks in a row. I think we only have one turnover in those two weeks. He's getting more familiar with the offense, and making good throws."

His team-mates are certainly impressed by his development to date:

"He's young but he's learning on the fly. Before it's all said and done, he is going to be a good player."

What I loved about KC’s performance last night was his pocket presence (referenced by CRN above).  He didn’t get rattled with the Cougar’s defensive linemen were barreling towards him (and on couple occasions had their arms around him). I love the way he distributed his 23 completions to his receivers (13), TEs (7) and backs (3). Overall he completed passes to 7 different receivers: 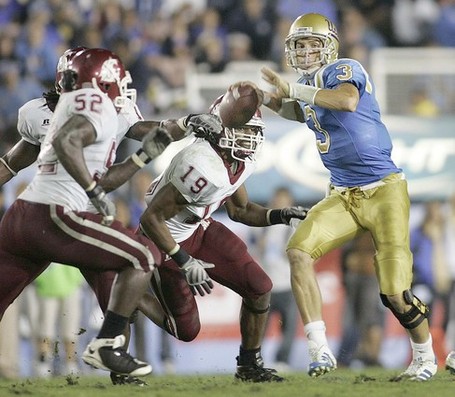 He has also emerged as one of the clear leaders in this team. He has developed a presence which one can see through his body language during the team huddle. When Bell dropped a pass (I believe it was in the second half) which could have been a TD, Craft didn’t waste seconds to point towards himself, smile at Bell and say "my bad." That kind of gesture/leadership from QBs taking responsibility doesn’t show up on box score, but makes unmistakable impression on team-mates (particular when he is producing results).

That said Craft I am sure will acknowledge that right now there is still lot of room for improvement. First, I think he is still a little too streaky. Once he throws a bad pass, it seems like it takes him a little while to get back in rhythm. We were seeing that in first quarter in the form of two straight ineffective drives. Also, he is getting a number of his passes tipped at LOS. I am sure that’s an issue Chow and CRN have noticed, and they will work with him to correct that in coming weeks. All in all, not a bad night for Craft.

Craft wasn’t the only with a decent night. It looks like Austin is slowly getting settled in this offense. He is also becoming a fearless weapon for KC. He is not showing any hesitation when coming down the middle (exposing his slight frame to opposing DBs). He did it few times last night after laying out for a spectacular reception against Fresno State last weekend. Taylor Embree also continues to shine as he is emerging as the most dependable (possession) receiver in this offense. As for Ryan Moya, he was already referenced above as the money receiver for Kevin Craft.

The running game was somewhat disconcerting last night as the Bruins managed 100 yards (in 37 carries) against a team that was allowing 269 yards rushing per game. Bell didn’t seem too worried about it after the game:

"I don't think there was anything wrong with the running game," Bell said.

"They had nine and 10 guys in the box a lot of times, so I'm not really worried about that."

I guess it worked out last night because Craft stayed poised and was able to manage the game by being efficient through his pass completions. Still I think we need more production out of our ball carriers.

One thing I want to note though: I really like Moline at FB. He provides lot more options at that position. He is very good in catching the ball out of the backfield and is a decent blocker (prolly the main reason he was getting PT over freshmen early on this season).

Speaking of disconcerting, the defense started off on a bad note (although not evident in box scores). We continue to see just too many mistackles out of this bunch. There were a lot of them early on and if we were playing a decent and experience offense, they would have made us pay.

But there were some good notes on defense. I liked what Walker did last night in terms of his blitz packages. He was mixing it up with Reginald Stokes and Chinonso Anyanwu at DE. I love the speed and intensity of Akeem Ayers at LB. More of him please.

Walker at times was subbing in 5-6 players in a play. It seemed like the speed and athleticism of these new kids and along with Walker blitzing from different angles, was allowing Price and Harwell to be even more forceful from the middle. Price is simply a monster. Also, as we heard during game week, Dye got a lot of reps in nickel situation.

Again, not sure how much we can take from this defensive performance against a dreadful football team. However, the signs were certainly positive and encouraging. If they can figure out a way to completely address their tackling issues, I think there will be reasons for optimism for this young team heading into rest of the Pac-10 season.

Hopefully the guys can use the efficient performance from last night as a motivation to get better this coming week. They are going to need to turn it up another notch (and then some) if they want to put together a competitive performance against what should be an angry Ducks team next weekend in Eugene.