We will start this Monday by turning our attention to right away. I am not sure there is any use in reflecting too much on the win against , which might be one of the worst Pac-10 teams in recent years. Whatever can be taken away from the Wazzu game will turn out to be irrelevant, if the Bruins come up with another horrific showing on the road like it did against BYU in .

Ducks are coming off their own tough outing against Southern Cal. But you can bet they are going to be chomping at the opportunity to put a hurting on UCLA (and not to mention on Rick Neuheisel because they have their own set of issues dating back to his days). We have at least couple of reasons to be worried right off the bat. First, Bruin’s horrific record on the road:

UCLA plays at on Saturday.

"Already has come up," Neuheisel said. "For us to get to where we want to go, we have to be a better team on the road, and we're going to work on that this week."

Neuheisel said Sunday he did not plan to alter the team's travel regimen. There could be tweaks in practice, but Neuheisel added he was not going to ignore UCLA's road woes.

"We have to talk about it," he said. "We have to come up with a strategy for how we're going to go in and be a better team in a different environment. We just have to play better than we did in . There's just no question about that."

Well whatever strategy CRN and his coaches devise, reviving the running game will be a big part of it. That brings me to the second reason for concern this Monday. UCLA’s running game took a step back against :

UCLA still cannot run. Sometimes. Outside of a 31-yard gain near the end of the fourth quarter, the Bruins gained 69 rushing yards. came in allowing 269 a game.

Not coincidentally, UCLA passed for 225 yards, continuing its trend to ineffectively pass and run the ball at the same time.

UCLA looked primarily to on Saturday after finding success in splitting carries between multiple backs the past two games. had 21 of the team's 37 attempts yet gained just 43 yards, second to Derrick Coleman (Troy High), who had 49.

"There were nine or ten guys in the box at any given time, so we couldn't run," said. "But we made plays when we had the opportunity."

UCLA might have been looking for a boost to the run game as it tried two direct snaps, but both of those both went for short yardage.

"We'd love to (do that more)," Neuheisel said. "If you watch college football across the country it's becoming a weapon."

If you take away Coleman’s 31 yard run in garbage time, Bruins rushed for 69 yards in 38 carries, averaging about 1.8 yards per carry. averaged 2 yards per carry rushing for 43 yards in 21 attempts (against a defensive frontline that up until last Saturday wasn’t stopping anybody): 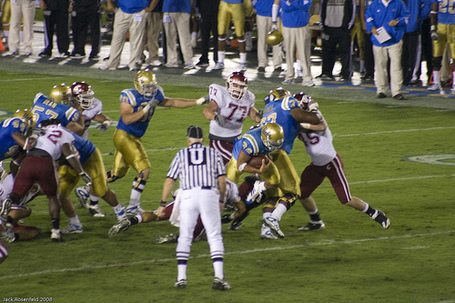 That was not encouraging. However, Wazzzu did stack the box throwing their entire kitchen sink to stop our run. And it could be that the UCLA coaches kept the scheme very basic against a bad team, not wanting to give away their full arsenal heading into more difficult matchups like the one coming up this weekend. didn’t look very explosive against the Cougars and tweaked his ankle in the first half. More from the LA Times:

Another concern may be tailback Kahlil Bell, who had 43 yards in 21 carries. But "tweaked" his injured left ankle in the first half.

Neuheisel said that was "fine" and would practice Tuesday. suffered a high-ankle sprain in the season opener. He is also only 10 months removed from surgery to repair a torn anterior cruciate ligament in his right knee.

Perhaps a solution would be lighten up the load for Bell (who had 21 carries) and increase that of Coleman? Coleman to date has rushed for 159 yards in 23 carries averaging about 6.9 yards per carry. That is not bad at all. Plus there is Dean lurking around with his speed and athleticism. If the light goes on for him during practices, it might be worth it to given him a decent look during the game as well.

Meanwhile, who has tried out 4 different QBs this season has their own injury issues:

coach Mike Bellotti told reporters it was uncertain if Justin Roper would be back at practice today. Roper injured his knee early in the season and was out last week because of an illness. But even if Roper is back, it may not matter. Bellotti told reporters Roper would likely begin the week as the backup to Jeremiah Masoli, but could compete for the starting job if his knee holds up.

Masoli’s numbers look more solid than Roper’s to this point of the season. This game is absolutely huge for DeWayne Walker. While the D put up some good numbers against , there are still reasons to be concerned. Our tackling was not great at all early in the game. If the Cougars had an explosive offense (like the one we are going to face against in ), it could have gotten ugly early on. Bret Lockett was still missing a number of open field tackles, and our frontline was not putting a lot of pressure on Lobbestael, until mixed up his blitz packages later in the game.

So it will be very interesting to see how the UCLA defense comes out on Saturday. Are they going to come out in a bend don’t break mode, sit  back, and let the action come to them from an explosive Oregon attack  or are they going to be aggressive and force the action early on? How the Bruin defense responds to the challenge (along with rest of the team) will tell us a lot about rest of the season on Saturday. will be the overwhelming favorite to win this game handily on Saturday, but it would bode really well for the CRN’s program if his team can bring the same kind of fire and aggressiveness, it has shown against and during last two games at the Rose Bowl.