After much anticipation, the Bruins and their Fab Five finally take the floor and end up cruising to an 82-58 win over Prairie View (Box Score).

Early on, the Bruins appeared too excited and were pressing a little too much, resulting in bad shots and some turnovers, but they eventually settled down and the 3's (from the new and farther line, which is a hideous aesthetic choice) started to rain down and we got to see a little of what CBH meant when he said this team had potential to be his best outside shooting team.

To me, the standout player tonight was a freshman, but not the Gatorade National Player of the Year (who didn't do too badly himself). I was surprised by the aggressiveness and general good decision making of Malcolm Lee who had 12 points but also 6 rebounds.

It's hard to draw conclusions from a game like this and it's hard to say anything decisive about our team when the outcome was decided with 30 game minutes left. What I can say with conviction is that this team has potential, especially if these freshmen mature as quickly as the class of Farmar, Afflalo, Shipp, and Mata-Real, who were essentially Sophomores come tournament time. What I can also say with conviction is that this team will have growing pains. The offense wasn't always efficient (rotations, spacing, timing) and the playmakers not always decisive, resulting in way too many turnovers. The defense also was not what I would call Final Four caliber (despite the picture below). 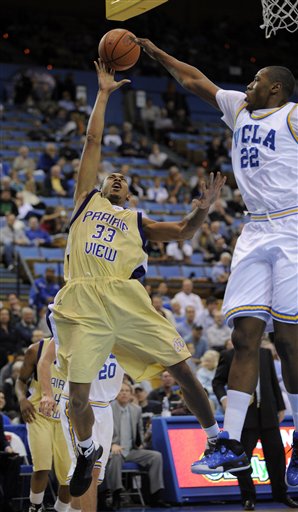 The good news is that these early problems make a lot of sense when you put the ball in the hands of freshmen (and they played very significant minutes). I believe CBH knows that he needs his freshman class to grow up quickly. The Trial by Fire that CBH subjected his first recruiting class to paid dividends later in the season, and I see no reason why a class this talented won't be able to handle something similar.

Either way, there's no time to celebrate. The Bruins will take on Miami (OH) tomorrow for the right to go to New York for the Semifinals. Let's hope our freshmen will feel more comfortable in the offense so that we can reduce the turnovers tomorrow night.