A Good Night In Seattle

Share All sharing options for: A Good Night In Seattle

We all knew about the drama heading into this game:.

Given all the distractions that was around this game from CRN's return to Seattle, Bruins pull off a very impressive win. Bruins roll over the the winless Huskies by a score of 27-7. They came out strong by scoring a TD by Derrick Coleman in a beautiful opening drive: 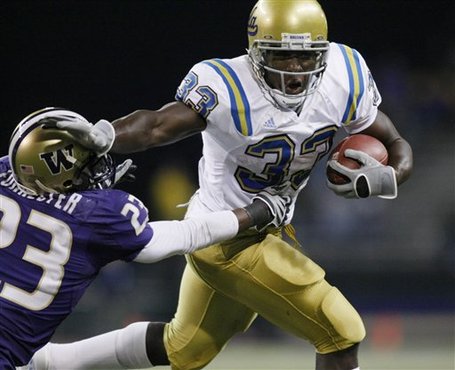 The Huskies showed a little life early on (thanks to what has become the usual Craft TOs) but our boys clamped down and pull off a satisfying win. Here is the AP recap and box score.

The defense was dominating, highlighted by monster play of Akeem Ayers and tremendous contributions from Moore, ATV, Norris, Harwell, Price, Carter and rest of the gang.

On the offensive side a solid night for our OL who generated a decent running attack. DC got things going early and then Bell came through with a gutty performance rushing for 98 yards in 25 carries.

Yes, we get the fact that the Huskies are a terrible football team. Yet, that shouldn't diminish what our young Bruins accomplished tonight by taking care of business while drama was swirling around the return of their head coach to his previous home.

Bruins still have a shot at a bowl game. If they can use the momentum from tonight by focusing even harder and pull off a win against ASU, they just might position themselves for a memorable ending to CRN's first season. Here is to hope.