Earlier in the day I was watching a Michigan team going through the same rebuilding pains we are experiencing during the first year of a new regime.  Seeing the Wolverines struggle against Northwestern (which is having a good season) in the Big House and tumble to a 3-8 record was something that put what we have been going through in perspective.

After beating Washington we now have a record of 4-6, keeping alive a shot at a minor bowl game. As I said during the game threads, I don’t think our team is as mediocre as our 4-6 record indicates, just like we weren’t as good as that 10-2 record from the 2005-06 season. I think if we had either Pat Cowan or Ben Olson healthy for an entire season, I could see our team winning at least 3 games out of Arizona, Fresno State, Oregon, Cal and Oregon State.  So, given all we have gone through this year with our injury and personnel issues, I am feeling all right with where we are at this point of this season: 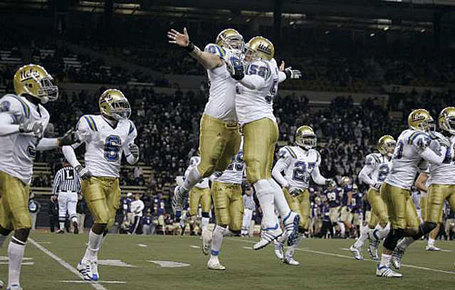 So with the macro stuff out of the way, here are some the micro issues going through my mind this Sunday

Craft had a good start last night but after a solid first series he reverted back to some of the same habits that have plagued our team all season along. He threw three picks. The first one was not his fault as Dominique Johnson simply dropped a catchable pass. The other two were indefensible (one he threw into traffic trying to thread the needle, the other was a badly overthrown ball). He also gave up a sure TD when instead of running into the endzone, he inexplicably tried a shovel pass dumbfounding the entire Bruin Nation. There is not much to add to the Craft story at this point of the season. The kid is playing his heart out. He is being a warrior. But what is obvious to all of us is a best he is a below average QB. I don’ t think he is the worst QB in UCLA history because I don’t believe QBs like Brett Johnson, Rob Walker, Ryan Fien or Ryan McCann had the moxie and toughness Craft has shown this season. But at the same time Craft hasn’t done much to cement himself as the returning starter for next season.

Still if anyone is clamoring for Forcier, just consider the fact that even after the game was long over late in the fourth quarter, Forcier was nowhere to be seen. It is clear to me that Chow and Neuheisel have concluded based on his observations that Forcier is not a viable option as a UCLA QB. If that is their decision, I am going to defer to their experience as probably the best QB guru tandem in all of college football.

While the Craft is cemented as the starter at QB this season, the running back position is becoming intriguing. Derrick Coleman started last night. Per Dohn’s report he got the start because Bell was disciplined for being late into a team meeting:

Bell, who has been bothered by a sprained ankle much of the season, carried 25 times and scored on a pair of 1-yard touchdown runs. His plunge in the second quarter gave the Bruins a 14-7 lead, and his dive over the pile on the first play of the fourth quarter put the Bruins ahead 24-7.

"I think he's gradually getting better, and with another bye (next) week he may be getting fresher," Neuheisel said about Bell. "We'll probably nurse him more and see if we can get him even better for two weeks."

However, what got the Bruins' stagnant running game untracked was Coleman's performance on the first series. He carried four times on it, finishing with an 11-yard run around left end for UCLA's first opening drive touchdown of the season.

"Derrick Coleman came in and gave a huge spark to our offense," Bell said. "That set the tone for the game, especially controlling the line of scrimmage."

Everyone here knows, how much I love Coleman.  I love his running style. He is a straight ahead North-South runner, who doesn’t dance around and waste time. He makes his decision fast and just pounds it. The energy and power he brought in that first drive was noticeable. I can only hope the coaches increase his carries even more in last two games. As for Bell, the kid is playing like a warrior. It’s obvious he doesn’t have the full power and menu of moves from last year. However, what was encouraging that he was getting stronger. It was great to see Carter make an appearance and he showed a burst of speed. But I guess I totally missed Aundre Dean’s 3 carries (for 9 yards) late in the fourth. So, you guys will have to fill me in on how he looked.

Hopefully our OL can generate the same kind of holes for our backs in our next game. Last night gave them a much needed confidence boost. Let’s hope they can maintain it.

As for our defense, it was mostly dominant:

"We didn't scout them to blitz that much," Fouch said. "They blitzed a lot more than we thought they would."

Fouch was 7 for 22 for 39 yards and threw two interceptions and was sacked twice. Washington (0-10, 0-7) turned the ball over five times and averaged just 3.2 yards per carry against a UCLA defense that blitzed more than it had all season and looked like it had a different mind-set than it had of late.

"We went all four quarters," said safety Rahim Moore, who had an interception and a team-high six tackles. "That was the best defensive game we've played all year. We came out here and got a nice win and it feels really good."

Rahim Moore had a great game. As did Akeem Ayers. Ayers was simply a menace. He was the catalyst in two of Washington’s 5 turnovers while registering 2 sacks for a loss of 15 yards. He terrorized Fouch all night by repeatedly blowing through the Husky OL like a guided missile going straight after the QB. Given the way Ayers has emerged this year and the solid play from Carter and Sloan, the future at our LB is looking great.

In addition to those two ATV and Norris had great games. I can’t remember who it was on, but ATV put on a bone crushing hit on a Husky player that would have made Matt Darby proud.

My only two complaints re. the defense from last night was first, early on they looked a little tentative against the run. Also, I thought they folded a little too easy in giving up the TD when they were put in a short field after Craft’s pick. Still all in all a great effort and I hope they can replicate that for an entire game against Arizona State in about couple of weeks. It would have them peaking going into the biggest game of the season.

In terms of injuries and personnel issues, here are the notes from the LAT:

He took snaps in practice during the week but had to back off. Neuheisel said he did not travel with the team because he would not have been ready to play.

UCLA offensive lineman Darius Savage tore a ligament in his left ankle during the first half of Saturday night's game at Washington. Savage will require surgery.

The note re. Savage is a huge bummer, especially considering the great start our OL had last night. Here is to hoping a full and healthy recovery.Glicksberg took over for Savage last night.

As for Olson, I wonder where did the broadcasters last night got the info re. Olson being at the game last night.

Speaking of broadcasters, one side note. I am getting sick and tired of announcers bloviating about CRN and Craft’s sideline discussions. It is pointless and tiresome. Guess what guys? I like the fact that my head coach is coaching his heart out and showing passion and care for his players. That’s how CRN has coached QBs all his life and he has a track record to back him up. The announcers commenting on CRN’s sideline discussions with Craft is just about as tiresome about reading knee jerk, reactionary comments about wanting Forcier, beating a dead horse. It’s boring and pointless.

Lastly, speaking of CRN we will end this Sunday by closing the loop on Washington-Neuheisel-UCLA story line:

"Emotional," Neuheisel said in describing his Montlake return. "Pleasantly, there were a lot of friendly faces. There's a number of great people here at the University of Washington. Contrary to all the articles and stuff, my memories are mostly favorable. I understand the messy ending. I apologized for my role in it. I'm hoping we can put this behind us as both programs look to the future."

Washington drama is certainly behind us now and we can now look forward to Arizona State.