Hail to the Chief!

Share All sharing options for: Hail to the Chief!

First of all, I'd like to thank all of those who kept us poor saps at work updated on the game. Second of all, let me say: Hail to the Chief! Big Alfred Aboya came up in a big way in a close game with 10 minutes remaining. The President asserted his dominance with 22 points on 6-8 shooting and 9 rebounds barely missing a double double as the Bruins take care of the Salukis down the stretch to pull away for a 77-60 victory. 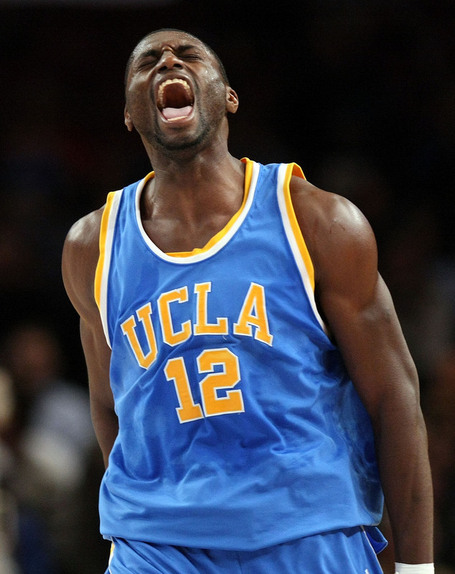 All I have to go by is the box score and the game thread comments, but after what appeared to be multiple defensive lapses in the first half, the Bruins seemed to have the answers defensively in crunch time. We were once again reminded that DC should really be taking more 3s as it was his back to back triples that busted the game wide open. I hope Aboya's breakout game is the beginning of a Ryan Hollins type of transformation.

From reading the comments, it appears that we still have much to work on (allowing 46% shooting), not that I'm surprised by that, but having a blowout game is still a great way to bounce back.

Edit: Let's hope Alfred's hand is okay. This would be a devastating blow after such a fantastic game. This isn't what I meant by this season being similar to 05-06.

Howland feared Aboya may have broken his left hand, but X-rays and a CT scan at the NYU Hospital for Joint Diseases came back negative.

A team spokesman said Aboya would have a precautionary MRI when he returns to Los Angeles.