Time To Put This Night Behind Us ...

Share All sharing options for: Time To Put This Night Behind Us ...

There is not much to say about tonight's heartbreaker. It's a game we have seen number of times through out this season.

Our defense played their hearts out. They controlled the LOS and dominated the Sun Devils. They along with the special teams did everything they could to put our team in a position to get a win. But they were once again undone by glaring offensive mistakes coming from the QB. It was another brutal night for Kevin Craft and an anemic Bruin offense: 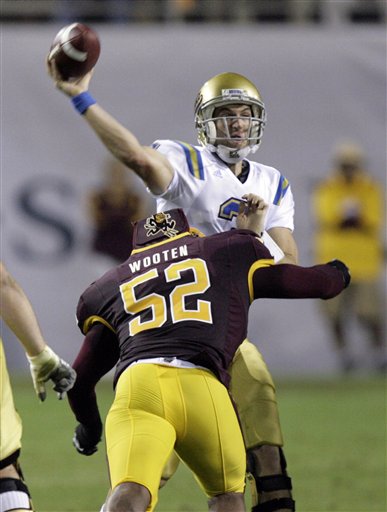 The final score was 9-34. All four ASU TDs came courtesy of Craft TOs (3 picks and one fumble). Yes, the Bruin defense held ASU to 0 offensive TDs, 20 rushing yards and a total of 121 yards. Here is the box score.

It is difficult to single out a college kid like Kevin Craft who is out there giving everything he can. He was getting beaten and taking a pounding from the Sun Devils all night. He kept getting back up and kept fighting. He wasn't getting any protection from the OL, which also wasn't helping out by generating any kind of running attack. Yet ultimately it was those unexplainable, bad throws leading to defensive scores that once again killed the Bruins tonight.

Not sure how much we should look back at this game which as mentioned above featured a memorable defensive performance including spectacular night from a much maligned Michael Norris.

I think for all of us ... we need to take a deep breath ... gather ourselves ... and summon up all the positive feelings we can generate for this team leading into the biggest week of every Bruin football season.

We are not going to mope around and feel sorry for ourselves this coming week. We will discuss whatever this team needs to do to pull out a victory next Saturday.

No shooting for moral victories and no surrender in Bruin Nation.