Three years and three Final-4s later, things have changed just a little bit around the world of UCLA basketball: 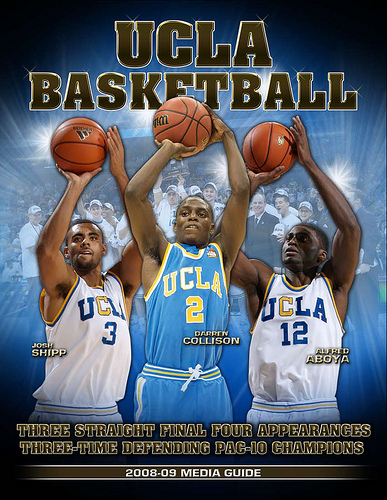 DC, JS, AA2 and a new batch of freshmen warriors will get started with Coach Ben Howland's sixth season in Westwood, which is also know as Howlandwood.

They tip off the season in an exhibition game against Cal Baptist. The good folks at Bruin Basketball Report (BBR) have written up their preview of the game here. Also, you can download the media guide displayed above via the official site.

There is no TV for tonight's game. However, you can catch it online. For more details go here.

So if you are watching the game on your computers tonight, share your first takes, impression on our Ben Ball warriors right here on BN. We would also love to hear your takes on the new kids if you are logging on after coming back from the game.