It was easy to project during off season what a difficult year we were going to experience this season. That doesn't mean it's easy to go through a rebuilding season.

This is not fun: 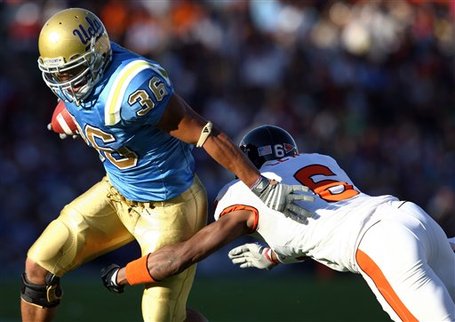 Bruins suffer what IMHO is the most deflating loss since the Arizona game earlier in the season. After playing a tough first half in which the defense came up with one big play after another, the team falls apart in the second half largely due to another atrocious day for the offense.

Beavers win by a score of 34-6. Here is the box score if you care to look.

Right now the biggest question in all of our minds is why can't our young guys get more opportunities on offense. I don't get why Derrick Coleman isn't getting more carries despite having better numbers and looking healthier and more productive than Bell on the field? And as horrific as Forcier looked when he got in, I think it is time for Chow and Neuheisel to give him more reps during practice. He can't play any worse than how Craft has played last two games. Can he?

Not a lot of silver linings out of this game. The defense was perhaps the only bright spot despite Michael Norris's ugly day. They were intense and they did everything they could to keep us in the game until the dam broke in the second half.

Also big ups to 83,000+ (according to the annoucers at least) who showed up for this game. That tells us a lot of UCLA football fans who are sticking with our team in what is turning out to be one of the most difficult seasons (which wasn't unexpected) in the history of our program. Our day will come ... but right now it's pretty clear we have a long way go. That's just the reality after five years of Karl Dorrell destroying this program.

Anyway, we are not going to give up. There is a shot we can regain the lost momentum from last three weeks, by pulling out a win next weekend on the road. It is going to be tough against another beaten up program which will be emotionally fired up given the circumstances around that game, but we will have a shot if we can somehow sustain our fight and tenacity for an entire game. Onward.