Bruins honored Coach today (which has become routine under CBH in our appearances at the Wooden Classic) by throttling Blue Demons in the OC upping their early 2008-09 season record to 6-2.

I missed today's game due to Holiday (no pun intended) festivities. So I am looking at the box score of what looked likes our Ben Ball warriors cruising to a comfortable 72-54 18 point win.

Ben Ball warriors led by JS and JH (each scoring team high 14 points) came out strong by running up a 16 point lead at the half: 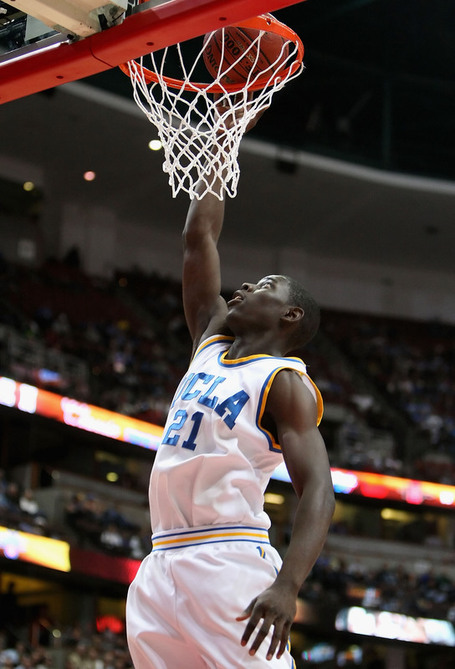 JH not only led the team in scoring but also in assists (5) and rebounds (6), 4 of which came from the offensive side of the glass.

Again looking at the ESPN box score, play-by-play list, and our game thread (BTW thanks to those who were posting scores, always much appreciated by those who check in via our berries and iphones) here it appears to me that the outcome was never in doubt. It looks like our frosh got some decent chunk of mins in the second half.

Also, it looks like the Ben Ball warriors held the Demons to 40.4% shooting and I am going to assume (and you can correct if my assumption is off base) it would have been much lower if not for garbage time in the second half.

Anyway, from the box score at least it looks we had a nice afternoon in the Honda Center. I am sure there will be lot of details to improve on. Yet given the upsets we have seen today around the nation as Tennessee and Kansas went down against lesser opponents, I for one am feeling good about our Warriors cruising to an easy win after going through finals week.

If you watched the game post your thoughts here and if you have extensive analysis to share, put them up in FanPosts.

So with that the court is all yours. Fire away.