A Memorable Win For The Caretaker Of Westwood

Share All sharing options for: A Memorable Win For The Caretaker Of Westwood

Thanks again to Telemachus for posting the video highlights from yesterdays (what appears to be crisp and efficient) win over the DePaul Blue Demons. We are now 8-3 in 12 Wooden Classic appearances, including 8-0 as a ranked team. The topline news in terms of statistics was last night’s win marked Coach Ben Howland’s 300th career win. Not a bad way to commemorate a key milestone for the Caretaker of Westwood:

"This one is special, because Coach Wooden was involved," Howland said, referring to the 98-year-old living legend who won 10 national championships during his coaching career at UCLA. (Humbly, Howland said it is still Wooden's program and that he is merely the "current caretaker.")

And here is our visual with the Wizard of Westwood, which we have gotten accustomed to during this tournament under the Caretaker of Westwood: 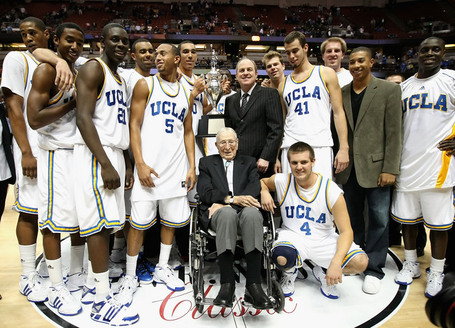 The kid sitting right next to Coach is none other than Tyler Trapani, who also got a little taste of the action in the waning mins of the game.

Well, from Tele’s highlights it appears that our boys were running and gunning all afternoon long. The up tempo style got attention of the local scribes (who somehow are completely oblivious to the fact that Coach Howland put together a high scoring, run and gun team in his first head coaching stop at University of Northern Arizona) and prompted the following post game comment from the DePaul head coach:

"I guess in a football world, he's always run the ball and played field position," Wainwright said. "Now he's got a West Coast passing attack. When you make a mistake, they really get out and go."

Yet as we all know too well the Ben Ball warriors were running up the court after getting started with defensive sports. As Painter reports in the Daily News, it was the defensive stops that got our transition game going:

The Bruins play good defense - a staple of most Howland-coached teams - but their transition game helped pave the way for an exciting offensive game, too, and UCLA isn't known for that. J'mison Morgan and Holiday had crowd-pleasing dunks on the fastbreak.

"It's something we're talking about," Howland said. "We're working on pushing it harder when we have the opportunity."

UCLA (6-2) did its share of stopping people Saturday, shutting down DePaul's best player, Dar Tucker, and holding DePaul to 41-percent shooting from the field. It was the Bruins' most well-rounded game this season. They had 19 assists to 11 turnovers and out-rebounded DePaul by 10.

Freshman Jrue Holiday led the Bruins in points (14), rebounds (5) and assists (6). He also did the lion's share of guarding Tucker, who didn't enter the game until five minutes had elapsed because he violated a team rule. Tucker made just 3 of his 13 shots for 11 points.

Holiday made a 3-pointer the first time he touched the ball. He said last week he wanted to shoot more, and Saturday the Bruins' best young player appeared to get his swagger back.

Holiday missed just two of his eight shot attempts and hit two of his three from 3-point range. His most spectacular shot came off Darren Collison's missed 3-pointer late in the game. He followed it by slamming it home with one hand.

JH might have been amused by the game day reports of certain local writers questioning the talent of our great freshman class. The role of playing the team’s key defensive stopper got his "juices going":

Holiday spent much of the afternoon chasing Tucker around the court and seemed to like the challenge of guarding the opponent's best player.

"I think that's what kind of motivated me," he said. "That got my juices going."

During one series of possessions late in the first half, he forced the DePaul star into a pair of long-range misses, then stepped in front of a pass and started a fastbreak that ended with an assist to Collison.

In addition to getting up and down the court via their fast break offense, it sounds like Ben Ball warriors were efficient in attacking DePaul’s zone defense (something with which they had trouble against the Wolverines earlier in the season) and did a good job of ball movement around the perimeter:

In those instances when the Bruins could not run, they got good ball movement around the perimeter of DePaul's zone, penetrating at times, occasionally finding open cutters with the pass, making 55.2% of their shots.

Shipp said an earlier loss against Michigan "opened our eyes and we felt like we needed to work on our zone offense. We've been doing it every day since."

Howland liked the fact that his team had 19 assists against 58 shot attempts, among other things. He thought that his players looked sharp despite a week of final exams back at school. He praised Dragovic for drawing a rare charge.

Hopefully the statistics of 19 assists will develop into a patter as it comes after a win against CSUN that featured 22 assists. Perhaps it’s a sign of a team that is methodically gelling as we wade through this non conference season. I don’t know about you but I am having just as much "fun" reading about the development of this team at this point of the season, as I was at the same time last season following a team that was burdened (by some) by heavier expectations.