It was an unsurprising result in an expectedly methodical dismantling of an undermanned Lion's team. The Bruins starters raced out to an early lead while the Clippers were busy losing and preventing the rest of us from watching it unfold, allowing the reserves to play early and often. Mike Roll started out hot hitting 3 straight from beyond the arc and Bruin fans were "treated" to extended garbage time (the entire second half), pulling away to win 75-44 (box score). 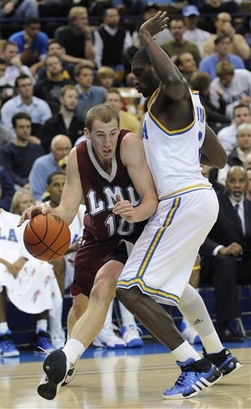 LMU tried to keep it close by sitting on the ball and utilizing the 2-3 zone on defense. However, in the end, the only suspense was whether the Bruins would double up the Lions.

Not much you can take away from this kind of game given the opposition, but at least the freshmen got a LOT of experience attacking the zone, the walkons got to play, and the Bruins pick up another win.