Umm, it looks we are not even going to have to worry about Presley sticking with his commitment because it is now official:

Morrell Presley, the No. 1 prep tight end in the nation, has signed a "Statement of Intent to Register" at UCLA and has enrolled in classes for Winter Quarter, which begins on Jan. 5, 2009.

Presley, who just graduated from Carson (CA) High School, is rated the nation's top tight end by Scout.com and ESPN.com. He is scheduled to play in the UnderArmour All-America Game in Orlando, FL, next month.

"I am obviously thrilled with Morrell's decision," said UCLA head coach Rick Neuheisel. "He is a quality young man with tremendous upside as an athlete.

"Morrell personifies the new age tight end," Neuheisel said of the 6-4, 215-pound Presley. "He is physical, so he can mix it up, yet agile enough to create mismatches with opponent defenses.

"He will love UCLA," Neuheisel concluded.

Welcome to Westwood Morrell!!  ESPN’s Greg Biggins ratcheted up the excitement even more earlier this afternoon:

The commitment of Presley is huge for UCLA. The Bruins have lacked a serious big play threat on offense ever since Maurice Jones-Drew left for the NFL three years ago and their best tight end prospect since Marcedes Lewis, who won the Mackey Award in 2005 and owns holds the UCLA record for receiving yards and TDs by a tight end. It fills a big position of need and with Presley graduating early (last day of class at was Wednesday) and enrolling in time for spring ball, he'll have a legitimate chance to make an early impact as a true freshman.

The fact that UCLA was able to steal a big-time recruit from their cross-town rivals can't be underestimated either. USC has dominated in-state recruiting for the last five years and ironically, with Presley's help, was able to steal then UCLA commit Byron Moore back in the summer.

Of course now that Presley has committed, there will be speculation that could jump ship as well. But that's not as likely. Presley grew up a UCLA fan and committed early to USC in part because the former UCLA staff was slow to recruit him.

, on the other hand, grew up a diehard Trojans fan and committed to UCLA when it didn't look like USC was going to offer him.

This likely won't be the last battle between these two schools as USC is hoping to get a visit out of UCLA commit Stan Hasiak and UCLA is hoping to do the same with receiver De'von Flournoy.

Looks like we now have another name to add to this list of head to head recruiting duel: Cathedral receiver Randall Carroll (who btw is the cousin of JetSki Franklin BlueReign was thinking of). From Dohn’s blog:

From what I hear, UCLA coach Rick Neuheisel was a busy person Wednesday. Not only was he at the home of Morrell Presley, the former USC commit and tight end from Carson High who committed to UCLA last night, but he was also set to visit with L.A. Cathedral receiver Randall Carroll.
Carroll, who committed to USC in September, is looking at other schools and my understanding is UCLA really wants his speed.

Again, at this point it doesn’t even matter whether CRN gets to pry open one or two more Trojan recruits. He has already sent a loud and clear message via Presley. I think we are going to hold on to Hasiak despite Carroll’s best shots given the amount of attention we have shown this kid via Chow, and with the kind of intensity we have recruited the state of Hawaii.

The fact that we are going so hard after Flournoy and Carroll without being intimidated at all from all the Trojan hype machine is already getting noticed. And I am sure the recruits also noticed the kind of passion, intensity and fight our football team showed despite getting bombed in BYU this past season. Our team bought into the mantra of relentless optimism. It never gave up and now the coaches are showing the kind of fire and intensity on recruiting trail we have only dreamed about for years: 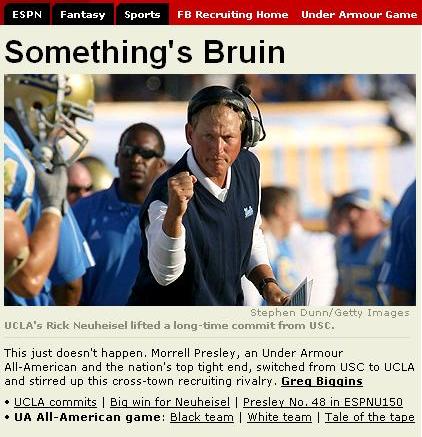 That was the frontpage of ESPN recruiting site this afternoon.

UCLA is not going to give an inch in LA’s recruiting battles any more. It’s clear Neuheisel and his staff are going to fight for every single recruit, whenever they find an opening. In my years of following UCLA football, I have never sensed this kind of excitement around recruiting. I didn’t sense it from Donahue. never exuded this kind of passion. As for Dorrell, I don’t need to go there. This is a whole different ball game now and it’s clear from Biggins’s ESPN report above, the Bruin vibe is being felt all around the college recruiting world.