If you subscribe to the UCLA magazine get ready for this cover to hit your mailbox: 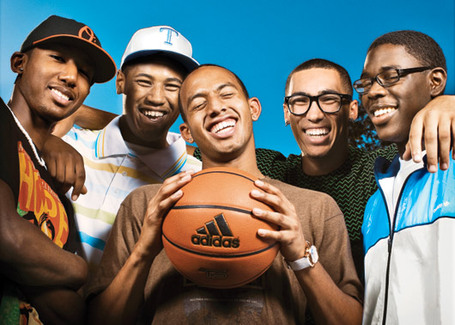 Yes, our freshmen warriors are the cover story of the January issue. This is probably the most fun article I have read on these freshmen, that delve into their personalities and talk about their experience as a student athlete. Wendy Soderburg and Patrick Giardino give us a little peak into what these kids think of each other. Apparently JH is a "homebody":

Surprisingly enough, Jrue Holiday, while perhaps the most highly touted of the freshman class, is also one of the quietest. As the other four describe him, he's a homebody. He even says so himself.

UCLA's close proximity to home no doubt factored into 's decision to come here. But with a mother who is a dean, an athletic director and a teacher at his alma mater, , academics was a big pull, too. "This is a really prestigious school, so that definitely caught my eye," says .

DG is the "enforcer" who "takes care of everybody":

Drew Gordon is a business economics major, but he also likes math and science. "I knew this was a strong academic school all around, so I was generally interested in the whole subject matter. I was going to pick and choose as I went along," he says.

Gordon has the reputation for being the "enforcer" of the group. As Morgan points out, Gordon takes care of everybody, making sure that they stay out of trouble. "But he likes to have fun, too, just like all of us," adds.

Like the other freshmen, Malcolm Lee had his pick of several top schools but chose UCLA for reasons that included academics, location and the tradition of the basketball program. He's been called a "gym rat" by his fellow freshmen for his propensity to shoot hoops at all hours of the day or night. "Every time he can get into the gym, he tries to get into the gym, just to put shots up," says.

JA (perceived by his team-mates) is an "outgoing, pretty boy, ladies' man":

An excellent high school student, Jerime Anderson has expressed an interest in communication studies. "My mom was always the type to say that you have to have a back-up plan," he says. Gordon calls Anderson a hard worker, but, as evidenced by the descriptions provided by some of the other freshmen — outgoing, pretty boy, ladies' man — he also likes to have fun. "He likes the girls," Morgan says with a smile.

And JM is the Class Clown!:

Everyone agrees that J'mison Morgan is the clown of the group. Even his nickname, "Bobo," was derived from "Bozo the Clown."

"When I was a baby, I had hair around the edges and down the middle, like Bozo the Clown, so my mom called me Bozo," he explains. "And my brother, who's a year and a half older than me, couldn't say 'Bozo' at the time, so he called me 'Bobo.' It kind of stuck." Obviously, Morgan doesn't mind the nickname — "BO" is tattooed on each of his calves.

Yet all five of them are crystal clear on what is their ultimate goal(s) at UCLA:

"That's the goal here at UCLA, period, for any sport to win the national championship, you know? It's not just us," says. "I want to see that happen for the seniors, who've been there three times in a row. Definitely, that's what I want to see."

Take in rest of this fantastic read with lot more great photos of these five freshmen over here.