We will start our game day note with an injury note.   aloyscius already put this up in our FanShots.  JS is out of tonight’s action against Mercer from a thumb injury.  Howland made the decision last night and he didn’t have any details on the extent of his injury. MR is going to get the start in place of JS and it probably will mean extra mins for ML: 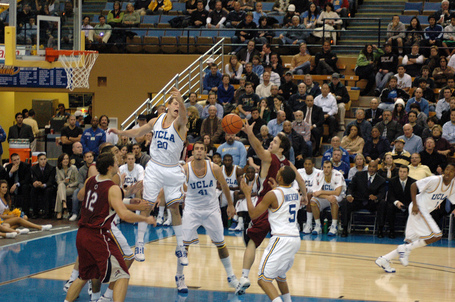 I imagine it’s a good bet we will get more info on JS’s condition during tonight’s broadcast on FSN West (via Bill McDonald and Don McLean) which gets started around 7:30 pm PST.

Without JS Bruins will have to be focused against a solid Mercer team (from the state of Georgia) which comes into Pauley with a winning record and two wins over SEC teams. From Sports Network notes, which can also be found on our BN game coverage page:

Mercer owns a solid 6-4 overall record, but the squad has lost its last two outings. On Wednesday, the Bears were clearly outclassed in a 104-74 setback to Oklahoma State on the road. They have beaten a pair of SEC foes this season in Auburn and Alabama, but neither of those teams are on UCLA's level.

They may not be at UCLA's level but note just last year Mercer beat the Gap Closers from cross-town to ruin the much hyped debut of OJ2.  So they are a much higher quality opponent than LMU and right now probably present a more dangerous threat than the Blue Demons did in Anaheim last weekend. More on the Bears via Sports Network:

James Florence is the leading scorer for Mercer, as he is posting 16.9 ppg despite the fact that he is only shooting 37.8 percent from the floor, including 27.8 percent from three-point range. Daniel Emerson has been a productive player for the Bears, as he checks in with 14.9 ppg and 10.2 rpg. Rounding out a trio of double-digit scorers is Calvin Henry with his 10.7 ppg, and he is pulling down 7.8 rpg to go along with his 27 blocked shots. Mercer is generating 73.6 ppg while allowing 75.3 ppg to opponents. In the lopsided loss to Oklahoma State earlier this week, Florence exploded for 27 points, but he did commit nine of the team's 25 turnovers. Mark Hall had 14 points off the bench, and Emerson finished with 13 points and 12 boards. Mercer actually outrebounded Oklahoma State, but the turnovers were too plentiful to overcome.

Against these guys Bruins will probably get their share of open looks. The Bears will probably throw a mix of matchup zone and man to man defense against the Bruins. So as he mentioned following the LMU game Coach Howland had the team working on "just shooting the ball":

In preparing for tonight's game, UCLA spent extra time with something that didn't go so well the last time out.

The Bruins, who shot 39% against Loyola Marymount, skipped a film session to focus on the basics of offense.

"We actually spent an hour of time just shooting the ball," Howland said. "We're always trying to talk about mechanics."

Knees bent. Hands up. Ready to catch and shoot.

"Just like all things in basketball, repetition is key," Howland said, "so we want to have a lot of reps."

Hopefully the game will allow JH and DC to get back in rhythm, who were a combined 1 for 10 from the three point line against the lions. Also, if they can continue to show the same patience they have been showing in our last few games in terms of minimizing the number of TOs it will bode well for us heading into these final non conference games.  For more on tonight’s game check out the official game notes from UCLA and Mercer.

Speaking of being patient, Dohn has a profile on J’Mison Morgan today in the Daily News. I have to say I am somewhat surprised to read JM’s comments in which he indicated that he felt a certain amount of pressure following KL to Westwood:

On the heels of all-American center Kevin Love leaving UCLA after one season for NBA riches, and Morgan's shift from signing with LSU in the fall but opting to attend UCLA in the spring, Morgan felt a load of expectations.  […]

"I think a lot of people expected me to be Kevin Love. A lot of people," Morgan said. "That was a once-in-a-lifetime gifted player. He could do it inside and outside, and I don't play outside. I think I'm more of a defensive player than him."

Well, if JM is reading this note he needs to know he should not feel any sense of pressure to be the next KL from Bruin Nation: 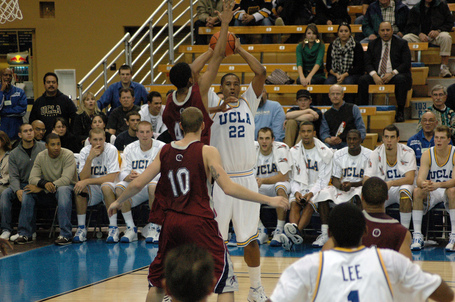 None of us expected him to be KL. I think we will not see another talent like KL for another decade or two (Coach Wooden was blessed to get the Big Red within years of the Big Fella’s departure) in Westwood. We understand he was a once in a generation talent and we certainly don’t expect neither DG nor JM to produce the same way KL did. We just need both JM and DG to stay focused, work their rear ends off just like LMR, RH and AA2 have done over the years under Howland, which should allow them to blossom into memorable Ben Ball warriors.

Dohn’s article also provided some perspective on JM’s life, who went through incredible physical pain and adversity before developing into a high profile basketball recruit:

By the time Morgan was finishing seventh grade, he was 6-3, and growing so rapidly his knees knocked together. Yes, literally.

"He was growing inward," said Morgan's mom, Bianca. "He started growing really fast. He was in a lot of pain whenever he played a sport. It was like his knees were on top of each other. Every time he would jump and come down on his feet, his kneecaps would go out."

The pain was so intense and the growth rate so "mad crazy," Bianca said, that surgery was performed. During the summer between seventh and eighth grades, Morgan had the growth plates removed from both of his knees. Two staples were also inserted above each knee to aid with stability, and to ensure he grew up instead of in.

Bianca said her son remained at Texas Scottish Rite Hospital for Children in Dallas, where the surgery was performed, for nine days.

Morgan, who attended South Oak High in Dallas, spent another four months in a wheelchair learning how to walk again.

"He was 6-3 when he had the surgery and he came out of the hospital at 6-6," Bianca said. "He was basically in splints from his hips to his feet. He is still growing, but now he only grows from the waist and by his ankles."

After the surgery Morgan said the only way he could move his legs was by lifting them with his hands. When it came time for rehab, he learned to walk with the aid of the parallel bars. He held each bar and said he consciously needed to tell his brain to lift his feet and swing his legs.

Read rest of the piece here describing how JM battled away and turned himself into a great basketball player. Reading the story leaves no doubt that JM will be fine in Westwood, battling through freshmen year adjustments to develop into another great Ben Ball warrior.

The training resumes tonight when JM and rest of his cover boys take the court against Mercer. We will have the game thread up about an hour before tip-off.