Share All sharing options for: Sunday Ben Ball Wrap Up

Let’s begin the extend Sunday wrapup last night’s action with the latest on Josh Shipp. From the OC Register:

The news is also encouraging from Dohn’s report in the Daily News:

Howland listed Shipp as doubtful for Tuesday's game against Wyoming, and wasn't sure about Shipp's availability for Dec. 28 against Louisiana Tech.

"The swelling has already gone down dramatically since (Friday) night," Howland said. "We'll see how it heals. It's not broken, so hopefully he'll heal quickly."

At this point JS should take all the time he needs to heal up so that we can have him at 100 percent when we get into Pac-10 action. It’s a huge relief to know he is not going to be out for an extended period of time because his leadership and big game experience is going to be pivotal if we are going to make a run this season.

Obviously the story of the night was MR stepping up in a big way to fill in for JS: 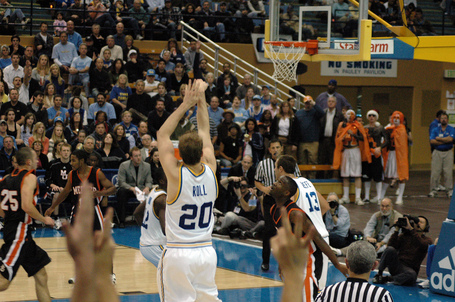 MR’s great night shouldn’t have been a big surprise. He has been playing well all season shooting at a blistering 57 percent from the 3 point line and also the same percentage over all. Not only that MR is playing well on both ends of the court. Our defense doesn’t lapse at all when he comes into the game and he also happens to be one of the best passers in the team. Lot of folks are saying that MR is finally living up to the hype. I believe that is selling this kid short considering all the injury issues he had to deal with last season. He has emerged in his junior year just like college kids used to emerge in their third and fourth seasons back in the when we didn’t have to deal with "one and done" phenomenon  in this game.

"Roll is so consistent because he shoots it great every day in practice," Howland said. "He's been our most consistent shooter, along with Darren Collison, and it showed in their play. - (Roll) is a very good passer. He's our best post feeder. And Mike's really improved on defense. He's a much better defender than he was his first two years."

As mentioned above MR’s big night from the peremeter opened things up in the lane for DC and rest of the Ben Ball warriors: 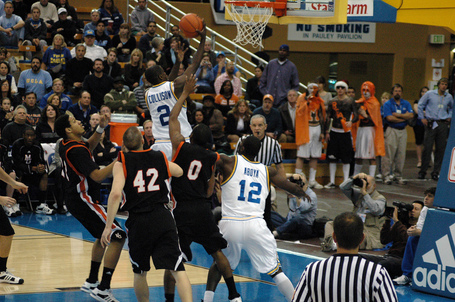 DC scored a game high 20 points as he attacked the basket with lot more aggressiveness in the second half. DC also locked down Mercer’s best scoring threat:

Collison said Howland mentioned to him several times during the week that Florence averaged 25 points in Mercer's victories over Alabama and Auburn and losses to Georgia Tech and Oklahoma State, what Howland calls "BCS Conference-type teams."

AA2 will probably say the same thing about Coach Howland as well. At the start of this season Coach Howland drilled into AA2 that the best way for him to help this year’s team was to stay in the game by playing solid defense, help control the boards, be opportunitistic on the offensive side and most importantly not get into foul trouble. The results early on from this season have been encouraging. AA2 looks more comfortable on the offensive side than we have ever seen him in his last three years. He is also playing under control by not picking up any silly fouls and also attacking the basket with more polished low post moves.

Now those were the positives from last night’s game. With two games left before the start of the conference season there are some questions and concerns that remain around this team.

Minute allocation between ND and JK (and DG):  I have to say I am starting get a little miffed about the amount of mins ND is getting. Last night ND played for about 19 mins. He was only 1 for 7, missing all of his 3 point shots (going 0 for 4). He did outrebound JK 5 to 3 (pulling 3 offensive rebounds and having a clutch put back to close out the half) but I thought our defense noticeably lapsed when he was in the game. Right now I think JK provides lot more upside than ND. I actually think DG has lot more upside than ND with his natural athletic abilities that can be potent on the defensive side.

If the argument is that ND provides a better 3 pt threat than JK, the numbers don’t back it up. JK (5 for 14 (36%)) is shooting much better from the 3 pt line this season than ND (5 for 30(17%)). JK’s career shooting percentage from the 3 pt line (12 for 38 (32%)) is also much better than what we have seen from ND (15 for 72 (21%)). I think it is reasonable to point out that ND is playing much better than he has in last two seasons. However, I am having a hard time how he continues to log as much time compared to JK and DG. Perhaps Coach Howland has an explanation but right now I am not seeing what he sees in ND.

Slow rotation:  We were seeing this early in the season. Last night our defensive rotation was slow at times resulting in easy buckets in the paint and open looks. Also, it resulted in Mercer Bears getting lot of offensive rebounds. They had 9 (we had 11) were barely outrebounded over all  (24 to 25). I think lot of this have to do with our freshmen like ML still getting used to playing Ben Ball defense. This is something I believe will get better as we go through the season. But it’s the kind of growing pain that might result in unexpected losses down the line.

Lastly, apparently at least Coach Howland was perturbed by a certain "choice" made by MR:

About the only thing Howland could find to criticize about him was his choice in girlfriends: Apparently, he is dating a USC student.

"We're a little concerned about that," the coach said.

Roll, in typical low-key fashion, did not want to raise a fuss. Asked about the young woman, he replied: "No comment."

I imagine given his penchant for details, CBH will be all over the concerns mentioned above and other aspects of the game amateurs like yours truly can’t spot while watching on TV. For now it’s a relief to hear JS’s injury isn’t a long term one. Hopefully he gets healed up over the Holidays and is ready to get back early in the conference season. In the meantime, it will be fun to watch this team continue to develop through this non conference season:

JH and rest of the Ben Ball warriors get back in action against a 9-1 Wyoming team on Tuesday night.