Off To A Perfect Holiday: Ben Ball Warriors Demolish Wyoming

Share All sharing options for: Off To A Perfect Holiday: Ben Ball Warriors Demolish Wyoming

Yes, I know we all need to maintain perspective. Wyoming hasn't beaten anyone special. They certainly showed they are not much of a defensive team. However, in a night when Portland State upset everyone's West Coast darling aka Gonzaga (still somehow ranked #7 despite losing two early season games) and Butler upset #12 Xavier, our Ben Ball warriors continue to take care of business by demolishing a Wyoming Cowboys team (infront of Jerry Bus) by 51 points.

The final score was 113-62 in favor of the good guys. Here is the early box score for a night in which the UCLA basketball team set a record in scoring under the Caretaker of Westwood, along with a record of steals. MR was the lead story again staying BLUE HOT from the long range, setting a career high scoring record with 25 points (5 for 7 from the 3pt line, shooting 9 for 13 over all). DC was methodical with 16 pts and 5 assists. Plus there were those freshmen (dismissed by some local blowhards as "over-rated" early in the season). DG finished the night with 14 pts, 11 boards (6 from the offensive glass) playing like typical Ben Ball warrior: 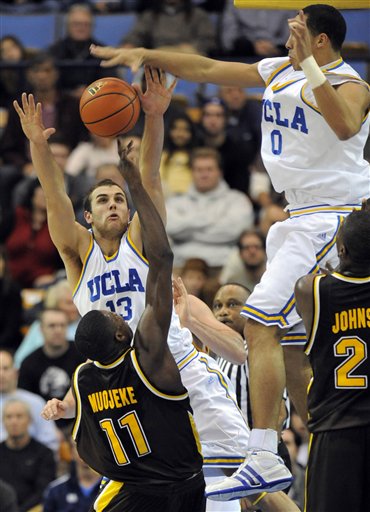 The only complaint from tonight was how the Bruins started on the defensive side. Wyoming came out a little hot making their first 7 shots and getting an early lead. However, that was it as Howland gathered the troops and unleashed that suffocating, on ball defense, which became even more lethal packed with MR's unstoppable shooting touch.

The best part from tonight was to get the sense of how this team is just starting to put it all together. You can sense how MR is not just getting comfortable from outside, but he is also running the baseline, and driving to the hoops. His performance is only opening things up for veterans like DC and AA2. Plus freshmen like MR and DG are just starting to settle down.

Ben Ball warriors have one more game this Sunday noon against Louisiana Tech to work out the kinks before they start the conference season. I don't about the rest of you, I am getting the sense the fun is only beginning. If these guys keep this up and keep developing like they have been through this conference season, Christmas joy in Bruins Nation just might stretch well into this spring.

So Merry X Mas & Happy Holidays everyone. Thread away.