Well, I am getting ready for the Lakers game out here after getting done with all Christmas morning festivities. We will probably make it to LA this weekend with a stop in Westwood this Sunday to check out Coach Howland and his Ben Ball warriors in the Cathedral of College Basketball.

So, the big question is: Where do increased minutes for Roll come from? The obvious answer is Josh Shipp, and that, of course, has been the long-running argument on the BRO Premium Hoops Message Board. The minutes are even more rare now that freshman guard Malcolm Lee is developing into a player you simply can’t keep off the court either. Lee had a UCLA-career high of 16 points, making 2 of 3 three-pointers, shooting 6 for 7 from the field, with two assists and two steals, and it looks like the freshman mistakes are starting to become more of the exception than the rule. Howland went to him quickly in this game to help guard Wyoming’s three-point bomber Sean Ogirri. Some will cite that Jrue Holiday should have his minutes trimmed, since he’s clearly in a bit of a three-game slump, particularly in shooting the three, going 1 for 14 in that span from behind the three-point arc. But, as we cautioned before, you have to temper your reactions, and not make hasty swings in perspective (aren’t there drugs for that?). Holiday is clearly the most talented player on the roster, who is capable of doing so much offensively besides just shooting threes – like passing and penetrating. It’s also a pretty good bet that, being a freshman and a potential lottery pick, that there is some considerable upside in letting Holiday play through his small slump.

So, does Howland simply take minutes away from Shipp? It probably won’t be a massive difference. Shipp won’t be playing just 8 minutes, say, per game. But we could see Shipp’s 26 minutes per game average dip a bit and see the 15 minutes per game Roll was getting before Shipp was out with his injured thumb increase. Howland said in the post-Wyoming game interview that Roll has earned increased playing time. How Howland manages this is the biggest – and most intriguing – issue of the season so far.

Perhaps increased minutes for Roll will improve everyone’s game. As we said above, it seems to improve Collison’s game, enabling him to get more open looks. Perhaps it will improve Shipp’s game. Shipp is a career 31% three-point shooter, but so far this season is only shooting 21%. Perhaps not considering himself the other player besides Collison who must hit his three-pointers will relieve some pressure for Shipp and his outside shooting will improve. Maybe a far more competitive environment for minutes will make Shipp be more active defensively. Many fans on the message board have correctly identified Roll’s emergence as a huge advantage, not a problem, and that’s definitely true.

I get that the message boards are all consumed with MR/JS PT debate. Honestly though for some reason I have a hard time getting all worked up over that discussion. No doubt MR is in a zone right now: 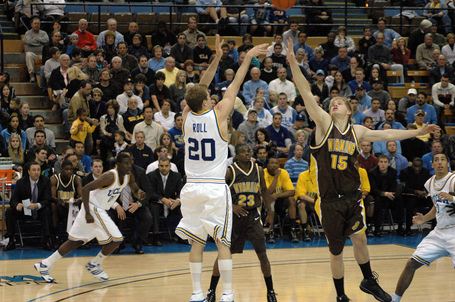 My personal preference would be to start MR over JS for now and slowly work JS back into the lineup until he is fully healthy. However, I am more than happy to have the peace of mind to know that we have the best coach in the game making these decisions. And MR's recent performance gives Howland the kind of good problems to deal with that other head coaches around the country wish they could have. Having to chose from good options is not a bad deal for CBH.

NMSU Athletics Director McKinley Boston would neither confirm nor deny the reports.

"I'm excited about all three candidates," Boston said. "This is one of the most difficult decisions I've had to make in a long time."

An offer could be made to one of the candidates as early as Monday, Boston said.

And if that doesn't work out, some like our friends at And The Valley Shook think that he is a good bet to be the next DC at LSU:

I still feel fairly confident that Dewayne Walker will be the next DC unless he gets a head coaching gig, but he in all likelihood will not pass up a head coaching position to come here.  Other than that, it's all a mystery.

Well, as I have said number of times before whatever Walker decides I hope it all works out for him. It would be good to have a resolution with his situation soon though so that CRN can move on to his contingency plans re. bringing in a new DC (and I am sure he has a solid plan in place) and focus on closing strong on the recruiting front.  Either way it will be a win-win situation for UCLA.