Soaking In A Perfect Homecoming

Share All sharing options for: Soaking In A Perfect Homecoming

Let me start my Monday here on BN sharing with you all the highlight of my Southern California vacation so far. As I mentioned yesterday Mrs. N and I were able to make it to Pauley Pavillion yesterday and meet up with some good friends and also be able to witness this: 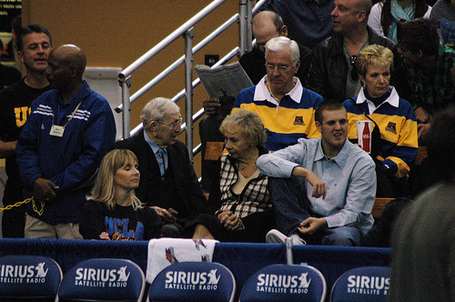 Coach’s first game in his House this season:

The image of Wooden, who was attending his first game at Pauley Pavilion this season, drew a minute-long standing ovation from the nearly 10,000 fans in attendance, many of whom began chanting his name as play resumed.

"To me, the most special part of the (game) was seeing coach Wooden," UCLA coach Ben Howland said. "It was nice to have coach Wooden here joining us for his first game of the season at Pauley Pavilion. It's always a big effort for him to come, so we're always delighted and happy whenever he can make it out."

Well can’t really describe how blessed we all felt to sit few rows behind the legend and be able to soak in the moment.

We got to Westwood a little early yesterday am so that we could get in our share of annual shopping at the Ackerman Bear Wear. The game day atmosphere within the store was pretty fun as everyone seem to be ravaging through the t-shirt/sweatshirt racks, and the cheer squad was leading full throated 8 claps through the store.

After the game we went straight down to the court and we got a chance to meet the Caretaker of Westwood for the first time since he took over our program. It was pretty surreal. I told CBH not to ever even think about leaving us and he had a quick retort in saying, "I am not planning to leave unless you get rid of me." I have been pretty much on cloud nine since that moment.

Oh about the game … I think watching these guys up close … I got the sense this is a different team than the one we saw few weeks ago in New York. Their defense looks so much together and so much more disciplined and patient on offense. As for the lead storyline, no question who was the MVP of yesterday’s afternoon’s game:

If there was any concern about how Shipp would perform after suffering an ulnar collateral ligament sprain Dec. 19 in practice, he put all doubts to rest during a 48-second span late in the first half, delivering a pair of monster left-handed dunks, the latter set up by one of Darren Collison's season-high 10 assists.

"I usually don't dunk with my left (hand), but I was on that side, so I just threw it down with my left," Shipp said. "I was open and I just went for it. I live in the moment and just let it flow and play as hard as I can. It was a little sore, but it's part of the game. You play through it."

JS was simply fun to watch. He was on defensively. Also, I am not sure if there is anyone else in the team that runs the court so hard as him. He was attacking the rim and finishing strong: 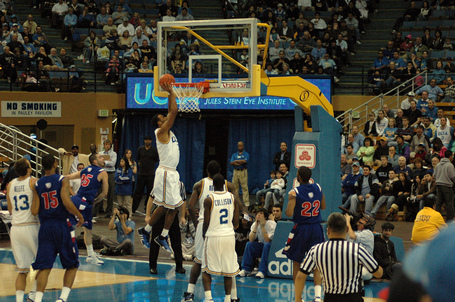 No doubt it was a nice lift for his team-mates as noted by JH in the LA Times:

"I think we feel more comfortable when he's on the floor," said guard Jrue Holiday, who scored 12 points. "He's a leader, so just having his presence really helps."

In addition to JS’s strong return, as mentioned above the defense was fun to watch. I have to say you don’t really get to appreciate the intensity and toughness of Ben Ball warriors unless you see these guys in person. The double teaming yesterday afternoon was suffocating: 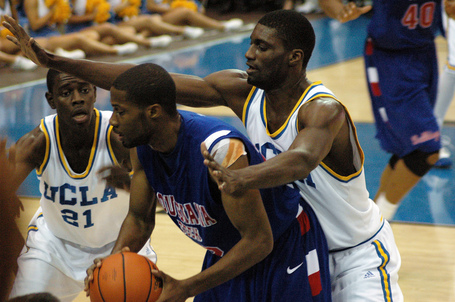 We could sense the haplessness of the Bulldogs when they were getting stuck on the offensive end. And there was AA2 leading the way in sacrificing his body by taking charges. CBH was all fired up from the efforts of AA2 and rest of Bruin forwards:

"I thought our defense was very good in the first half," Bruins coach Ben Howland said. "I think we're doing a good job of getting back (in transition). But the way Alfred is crashing the boards, his intensity cannot be overstated."

DG’s athletic ability is amazing. It’s clear when he comes into the game he brings up the energy and intensity to another level. He is also not shy about attacking the rim: 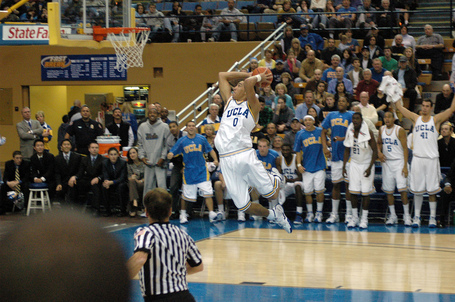 IIRC he missed than one. :-) It was pretty hilarious. The kid was embarrassed but he was a good sport and we all had a great laugh. But he is not going to have those misses down the line. If he stays with his current progression pace, he is going to be some kind of player in the coming years.

I think JK needs to settle down a bit. He is doing all right on the defensive end but seems like he is starting to think a little too much on the offensive. He can probably learn a thing or two from AA2 who seems to have develop a natural ability to drive towards the basket on the offensive side. AA2 is no longer thinking too much out there as he is attacking the rim almost instinctively and looking even comfortable from the FT line. We always knew what we were going to get from AA2 on the defensive side, but it’s becoming a treat to see him go through a RH like evolution.

Speaking of picking things up how about JA? While ML has been becoming on in last few games (he looked all right yesterday even though he wasn’t dressed for the game. He seemed to moving around ok. Hopefully we will get some encouraging newsy today), yesterday it was JA’s turn to flash his potential. He was smooth, driving the lane, knocking down couple of long bombs, being patient on offense, and also playing solid defense.

Of course it helps JA that he is playing being an AA point guard who has quietly been putting together a fairly awesome pre-season. DC didn’t score a FG yesterday but it didn’t matter much as he racked up a season high 10 assists, looking in total command of team ready for the conference season. Here is Coach Howland on his pre-season AA pg:

"Darren is really not interested in who is scoring," Howland said. "He's a guy who could've gone to the NBA, but he wanted to come back and lead this team to winning. Ten assists and only one turnover shows his maturity. He knows he's our best player. He's our most important guy night in and night out."

Even JH seem to shake of the rust from last couple of games and early funk in the first half with a strong finish in the second half. JH stayed with it on the defensive end and around the boards, finishing with a double-double.

Coach Ben Howland sounded guardedly pleased on a number of fronts. He liked his defense and the contributions from the bench.

"I actually thought it was a good game for us from the standpoint of playing [against] a lot of zone," he said. "Because Oregon State . . . is a team that plays 40 minutes of zone."

Hopefully we will able to sustain the momentum and improvements from last few games and get off to a good start in Corvallis. I am sure the Beavers are going to be fired up for our game making to look a blockbuster statement to usher in the Pac-10 season under the new coach. Given what we have seen from our last few games, I am encouraged about the focus in our young team.

Again, over all a great afternoon in Pauley which so far has been the exclamation point for a perfect homecoming trip to Southern California. After the game was over we were able to meet up with Achilles, Menelaus and Meriones for a nice Sunday evening happy hour in Westwood, which was a lot of fun. As I mentioned in our Holiday post, I think we are in the middle of what should be one of the more prosperous eras in Bruin athletics given who we have in charge of our major sports programs. We could sense that Bruin vibe of optimism all around Westwood yesterday. Good times.