Share All sharing options for: Keys To Bruin Immortality

Ted Millers provides the obvious key for a Bruin victory on Saturday:

For that upset to happen, one thing absolutely must occur: UCLA quarterback Kevin Craft has to play well.

That's a big if. Craft has thrown 12 interceptions in the past four games with no touchdowns. His post-pick trudges to the sidelines for another harangue from Neuheisel have provided must-see moments for the television audience.

"Kevin Craft has been tougher than nails and has been a try-hard kid," Neuheisel said. "Unfortunately, we had to put too much on his shoulders."

As in, Craft has had little help on an offense that can't run or block or get open very well.

The offensive ineptitude is why a pretty solid defense doesn't have great numbers, but Harwell says he only has love for Craft.

"I told him we believe in him," Harwell said. "Yeah, it's frustrating when he throws interceptions. But we're a team and we have his back. If he gives great effort, we can't ask for anything more."

It figures to take more than just great effort or relentless optimism for the Bruins to prevail.

So what is it going to take besides Craft playing a mistake free game, winning the turnover battle and the defense putting together a monster effort on Saturday afternoon. Here are some other keys I think could come in very handy for our boys at the Rose Bowl:

All of this is of course easier said than done. But we know it's been done before: 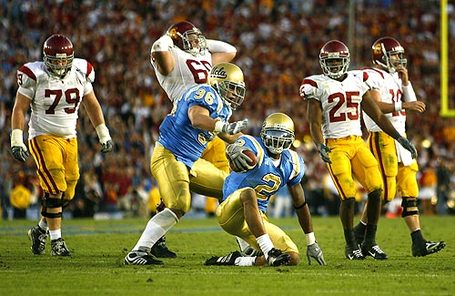 If we are going to win on Saturday, we will need to have some one new to step up and get immortalized as the latest Bruin legend. Who do you think it might be?

Any thoughts on other keys to a Bruin victory or should I say immortality?