So Much Room For Improvement

Share All sharing options for: So Much Room For Improvement

Even though I believe that in the grand scheme of things we were going to be ok, no matter what transpired tonight, every loss stings.  Our number 9 Bruins lose a tough, hard fought game against the number 8 Horns in another nail biting game.

Despite heroic efforts from DC and AA2, Ben Ball warriors go down in the Lone Star state by a score of 64-69: 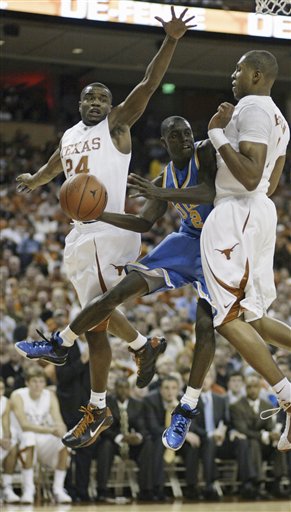 Here is the raw box score.

The game was another heart breaking and frustrating loss against one of the better teams in the country. A. J. Abrams killed us by scoring 31 points and reminding JH that he has a way to go to turn himself into a one and done, first round pick.

Bruins came out looking sloppy on offense and slow on defense. We were not moving around the ball well and looked a step slow in our rotation falling behind by 9 points in second half.

Then we made our charge and probably the most encouraging aspect of tonight's game was the way this team responded to a 10 pt deficit against a very tough team on the road. They figured out how to play that classic Ben Ball defense, rebound the ball, and show grit and fight, erasing that deficit and going up by against the Horns.

Bruins fell short at the end. They have a lot of work to do. They need to figure out a way to solve their FT issues (which killed them tonight), hustle for the entire game for boards and loose ball (taking their cues from AA2), and for freshmen like JH and JM get in better game shape.

They will get it done. They will get better. From what I saw in the second half tonight, I am optimistic about how this team develops through rest of this season. There is so much room for improvement and we know CBH and his staff are going to make sure our Ben Ball warriors do just.