We have another huge game on tap tonight in Bruin Nation.

As rye covered earlier this week the top-seeded UCLA soccer team is appearing in their sixth consecutive College Cup tonight.

Lauren Cheney is going to look strike early against UNC Tarheels, another number #1 seed and a dominant power in this game: 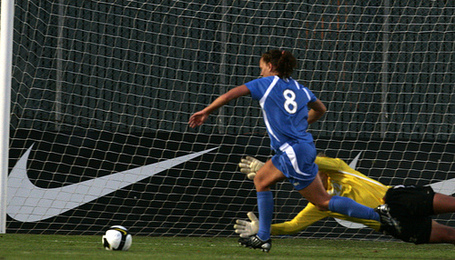 She scored on that play (pictured above).

The game will be broadcast live from Cary, North Carolina on ESPNU starting at 4 pm PST.  This should be an epic game. From rye’s notes:

Here are some numbers related either to the Bruins' season or the College Cup. 1) The Bruins have allowed only one goal in the NCAA tournament and only five goals all season. 2) With a win on Friday, the Bruins will reach the 23 win mark which would be a new school record. 3) UCLA has recorded three consecutive undefeated home seasons now, a streak of 55 matches. 4) Not only will the College Cup be comprised of four #1 seeds, but the four schools have a combined record of 92-2-5 this season.

More from the official site here.

If you can’t watch ESPNU, you can track the game online via the official site.

I am assuming rye and others might be posting here with in game updates/instacommentary. So check in early and often in this game thread and better yet if you are watching the game fire away.