The Last Game: "Let It All Fly"

Share All sharing options for: The Last Game: "Let It All Fly"

So the big tripleheader week is off to a pretty tough start. Bruins lost a frustrating game against Texas Longhorns Thursday night (a game in which they showed a lot of heart and grit but still came up short in agonizing closing mins). Then last night our ladies came up short once again in what sounds a like tough game against North Carolina in the College Cup. So today the tripleheader ends with our last football game of the season against Southern Cal. And for the last time we are going to see seniors like Harwell, Bell, and Everett coming out at the Rose Bowl: 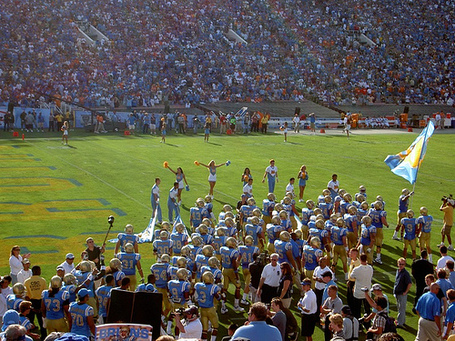 How special is this game?

Well for those who cannot make it because of last minute "family emergency" or "Monday finals" consider this from Harwell (emphasis added throughout):

Life for Harwell has not been easy, beginning at an early age when he, two of his brothers and his mom, Ruby, lived in a car. Harwell said it was a challenge getting regular meals and he took showers at friends' houses.

Harwell said in a previous interview that his mother was declared unfit. He was placed in foster care for nearly two years, away from his relatives, until his brother and sister-in-law, Joe and Jamila Williams, gained custody of him.

"My brother and his wife took care of me in high school, and I wouldn't be here if it wasn't for them, so they're going to be on the field with me," Harwell said of pregame introductions. "My mom is supposed to be there. She's coming. It'll be her first game in my whole life."

You think he will be a little emotional today. More on the emotional roller coaster the seniors will be experiencing when they enter the Rose Bowl this afternoon:

"I had my ups and downs," senior defensive tackle Brigham Harwell said.

Of his years, senior wide receiver Marcus Everett said: "They've been up and down."

Said senior running back Kahlil Bell: "Rarely in life do things ever work out the way you want them to."

Despite their resigned comments, Harwell, Everett and Bell said they were proud to have helped lay the groundwork for what they hope will be the resurrection of UCLA's football program.

"If I could do it all over again, I think I would," Everett said. "This is the best place in the world."

Said first-year Coach Rick Neuheisel: "I'm going to always have a very special, fond spot for them in my heart. It would've been easy to say, 'We don't have to listen to you. We only have one more year.' They did anything but that."

These guys have been nothing short of remarkable. I will always remember them with the same fondness I remember DT, CB and RH. They are the ones who facilitated the transition during CBH’s first years at UCLA. Kids like Harwell and Bell (who have always been vocal) could have made CRN’s life even more difficult in a tough first rebuilding year. Instead they have been chipping away serving as perfect examples of how our guys are supposed to leave everything on the field. They are the ones who have helped this team keep it together and keep fighting – relentlessly – even after that humiliating perfect storm they went through in BYU.

In terms of the long term, Harwell is leaving with some strong words (presumably directed towards the UCLA administration):

"UCLA needs to get more guys in that are struggling, or don't have the highest scores," Harwell said of the school's admissions policy for football players. "Once you're here, you get so much help. I barely got in this place. I mean, barely. And I got a degree in three years and three summers. So, it's not hard.

"It's not fair. It's really not fair. Once (a player is) here, he has the opportunity. I know a lot of guys that want to come here and be a Bruin in my 2004 class. Great guys. NFL guys, and they couldn't get in. I get mad at that."

This is a topic I am sure we are going to be discussing more of in the coming months/years. Hopefully Harwell will be around Westwood as an influential voice on his suggestions to make UCLA a stronger program.

Anyway, going back to today’s game, if you are wondering about player’ mindset per CRN they are "excited":

Who could blame UCLA players if they were a little nervous this week? But players seemed upbeat, and quarterback Kevin Craft was throwing a ball around and laughing after practice on Wednesday. The Bruins seemed to be enjoying themselves.

"I think loose and relaxed is probably a little overstated in that it doesn't take concentration into consideration," Bruins coach Rick Neuheisel said. "I think we had great concentration. They're excited about the game. We don't get to play after this one. This is our last game. When you get a chance to play your last game, you want to let it all fly. And make sure in some way, shape or form you're letting everyone else around you appreciate getting to play with them."

For more on today’s game here are the game coverages from the LA Times and the OC Register.

Kickoff is scheduled for 1:30 pm PST. The game thread will be go up around 1 pm PST.  See you then.