Tough Loss But We Will Be Back ...

Share All sharing options for: Tough Loss But We Will Be Back ...

It's never fun to be on the losing side of this game. I don't believe in moral victories in this game and I am not going to start now.

Bruins came out fighting with a fiery defense and an inspiring play by Kahlil Bell, the senior who has been gutting it out through injuries, playing with heart all season long: 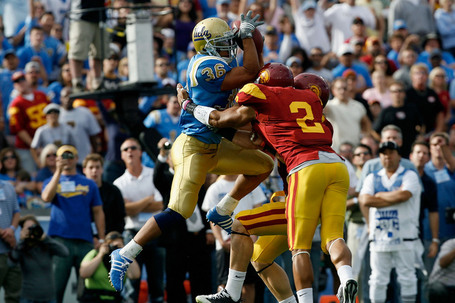 Yet at the end it was the overwhelming advantage Trojans had with talent at all the skill positions that became the obvious difference in this game. Our guys didn't back down. They gave everything they had. Yet the felt short. Way short. The final score was 7-28. Here is the early box score.

Congratulations to the Trojans on another great season. When it comes to football, they own this conference and this town. At least for now. So they should get all the accolades.

As for us, the coaches need to go back to the recruiting trail and build on the relentless effort the team gave them following the crushing loss in BYU all season long.

Thanks again to Bell, Harwell, Norris and rest of our seniors for everything they gave us this season. Also, thanks to all those Bruins who showed up to support our seniors and rest of their team-mates at the Rose Bowl. You make all of us proud in Bruin Nation.

I will now look forward to what we are going to get out of Coleman, Knox, Dean, Ramirez, Prince, Brehaut, Moore, Hester, Woods, Baca, Verner, Price, Jones, Carter, Ayers and rest of the guys coming back next season.

We have a long way go to become a viable program and I don't think we will get all the answers next year either. It will take time. As we have mentioned numerous times on this blog, it took Howland 2+ years to turn around our dead basketball program. It takes longer to rebuild a football program given the sheer number of scholarship athletes coaches have to recruit and manage. From what I have seen this season, I remain hopeful.

My only complaint from tonight's game was that I wish Neheuisel went for it on 4th down deep in the 4th quarter instead of punting (then again I guess he had to consider the options he he had on offense which weren't many).

Again there will be no celebration of "moral victory" or taking solace in beating the spread. That's garbage. What we can do is to keep track of the recruiting trail next couple months,  get excited about spring ball and find out how the QB competition shakes out. I remain optimistic. We will be back. As the ABC announcers said during half time, "buy stock in UCLA."