Bruins run away from CSUN early despite turnovers and sloppy play to win 85-67 (box score). Jrue Holiday and Josh Shipp led the Bruins with 14 points and DC had 13. Aboya and Keefe nearly joined their fellow starters in double figures with 9 each.

If nothing else, the Bruins avoided repeating the past and left no doubt that there would not be a Lavin-esque letdown tonight. Instead, the Bruins stepped on the Matadors' throats early. 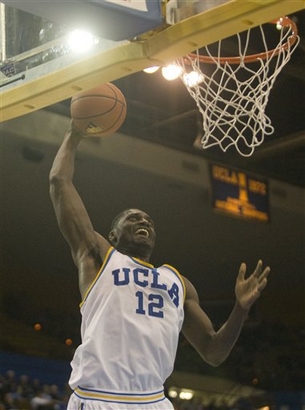 When CSUN went to a trap against the freshmen, the game understandably got sloppy on our end. Once again, turnovers and free throws were a problem for the Bruins, so there is still a great deal of room for improvement still.

Now that the Bruins have a week off (for finals) hopefully we see this team take another step. We've seen the defense and rotations solidify a little bit after our last week long break against Texas, and we need to use this week off to continue working at this pace to get to where we need to be. For early December, we're still looking pretty good with not a lot of (unpleasant) surprises.