Share All sharing options for: Fun, Fun, Fun at the New York Times

It's the paper of record.

The New York Times has a long and enjoyable feature on Kevin Love in Tuesday's edition. The article was written by John Branch.

You can read the online version here: 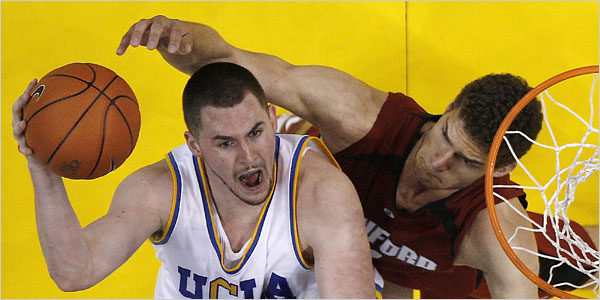 Here is a snippet:

LOS ANGELES -- For years, Kevin Love did not say that he liked the Beach Boys. Growing up in Lake Oswego, Ore., a damp and leafy Portland suburb, it simply was not cool. The Beach Boys were so ... 40 years ago. They were so ... California.

"He doesn't like to admit that he listens to it as much as he does," said Mike Love, an original Beach Boy and one of Kevin's uncles. "Because it might mess with his street cred."

But now that Kevin Love is the athlete of the moment in sunny Southern California, a 6-foot-10 freshman center leading the top-seeded U.C.L.A. Bruins into the N.C.A.A. tournament, he is not worried about hits to his cool quotient.

"Coming down to L.A., Southern California, everybody appreciates their music," Love, 19, said. "I'm not going to say I'm a conformist to everybody's music, but I've always liked the Beach Boys. I just never liked to say it front of my friends back home."

What could be determined much sooner is Love’s legacy at U.C.L.A.

"It’s been the ride of my life," he said after a victory last week in the Pacific-10 Conference tournament.

The next night, for the semifinal game against rival Southern California, friends and family filled a suite high above the court at the sold-out Staples Center. Sitting in the front row of the suite was a 15-year-old cancer patient named Ryan Runchey, whom Love has befriended in recent months. Standing in back was DeAnthony Langston, a youth-program director in Watts, who tested Love’s street credibility last year by taking him for a haircut in one of Los Angeles’s toughest neighborhoods. Love never flinched, and impressed even more when he bought a bicycle for a 7-year-old boy he met during another inner-city excursion with Langston.

Kevin Love's greatest gifts are not his substantial size and strength, but his all-around skills and savvy. He is often compared to Bill Walton and Wes Unseld, cross-generational links as apt as they are obvious. Walton starred at U.C.L.A. Love's middle name, Wesley, honors Unseld, Stan Love's teammate with the Bullets.

Love's favorite play may be the outlet pass, which he throws with decisiveness and precision. Bounce passes are as satisfying as dunks.

"I just get a kick out of it," Love said. "I love scoring as well, I love rebounding. But watching the rest of my team get off, and us working as a unit, that's going to take us the farthest."

Just read the whole thing over at the Times' site (Linked above).