As information concerning UCLA football coaching staff salary became recently public, Dohn dug into it a little deeper. and found that UCLA is not spending all that much on CRN’s coaching staff compared to the one put together by Karl Dorrell:

Dorrell's last staff was guaranteed $1,620,000, and Neuheisel's staff is guaranteed $1,405,000, plus offensive coordinator Norm Chow's yet-to-be-released salary. Sources put Chow's salary between $300,000 and $350,000.
I think it is one of the best staffs around, but it will be interesting to see what happens in the cases of running backs coach Wayne Moses and special teams coach Frank Ganz Jr. Both are being paid $100,000, well under market value, because they are still being paid by their former NFL clubs this upcoming season.

This should not be a total surprise to anyone here. If you have followed CRN’s every move since he returned home as the head coach of our football program, you’d know he has used all of his connections and charisma to put together one of the best coaching staff in the country. The question is how long can he hold on this staff?

Well here is one way we can all help. In the coming months Neuheisel is putting together fundraisers that will aim to boost the funding available for UCLA to hold on or attract talented coaches from around the country. And there is a big one coming up this Saturday in Orange County: 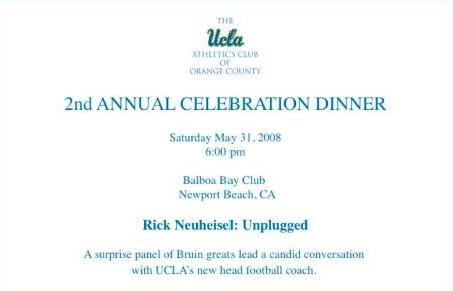 You can click on the graphic to see the information re. this event, which was emailed to us by a reader who is helping to promote this event.

Individual ticket costs $250. If you’d like to RSVP for the event today email Scott Nelson at snelson@athletics.ucla.edu.

If you live in Southern California, I’d highly encourage you to attend the event. And if you are going tell us about it here on BN or at least you will be able to mention how you had dinner with three wealthy and influential alums!