Share All sharing options for: The Road to 200: Women's Water Polo Edition

Okay, okay, no one's getting crazy here, but it's nice to be looking forward.  And it's hard not to think about national championships when the subject turns to the Bruins woman's water polo team, our very own dynasty of the water world.

A year ago next week, the lady Bruins brought us No. 100.

Now, the Bruins, led by Cutino Award finalists Courtney Matthewson and Jillian Kraus, and winners of three consecutive NCAA championships in 2005, 2006 and 2007, look to make it four in a row by capturing their 10th national title overall.

By the way, these kinds of stats are just ridiculous:

And the lady Bruins have it rolling again this year, riding a perfect 30-0 record after capturing their second-straight MPSF Championship after just another win against USC (their 3rd of the season). 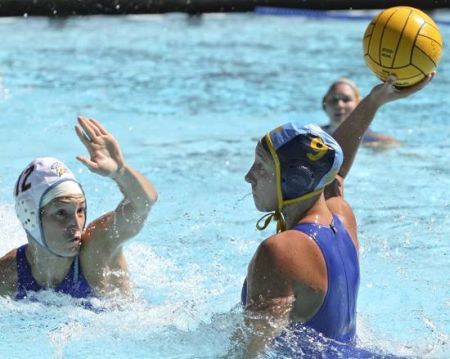 For those of you who haven't been following our lady Bruins, here's a tournament preview of UCLA by the Bootleg:

About the Bruins:  UCLA has put together an amazing season this year, after winning national championships each of the last three years. They look to become the first team to go undefeated since 2005.  Coach Adam Krikorian, in his tenth year, brings a veteran team led by junior Katie Rulon with 58 goals, senior Jillian Kraus with 54 goals, senior Courtney Mathewson with 50 goals, senior Brittany Rowe with 48 goals, and junior Tanya Gandy with 42 goals.  Mathewson and Kraus shared MPSF Player of the Year honors, and junior goalkeeper Brittany Fullen sports a 4.77 GAA.  The Bruins have shown chinks in their armor -- winning by just one goal three times, including an overtime victory over Stanford in the UC-Irvine Invitational.

How they got here:  UCLA beat USC 8-7 in the MPSF Tournament finals to earn the automatic bid. They are undefeated and were the obvious choice for the top overall seed.

Outlook in the tournament:  The Bruins will have the easiest trip to the championship game.  After a warmup against Pomona-Pitzer on Friday, they should have little trouble with the winner of the San Diego-UC Davis game.  They can thus put all of their energy into preparing for either Stanford or USC, which have each almost beat UCLA this season.  In the end though, UCLA’s combination of toughness, all-around offensive capabilities, and veteran leaders may be too much for any team to solve.

This year's NCAA Tournament begins today with a 5:00 p.m. matchup against Pomona-Pitzer (17-11) at Avery Aquatic Center at Stanford (the No. 2 seed). The Sagehens, the only Division III team in the tournament, will have their hands full with the Bruins.

Pomona-Pitzer earned the Southern California Intercollegiate Athletic Conference’s automatic bid to Palo Alto last weekend with an 8-7 win over Cal Lutheran in its conference’s tournament final. Despite going 8-1 in their conference regular season, the Sagehens were 0-2 against teams in the Mountain Pacific Sports Federation, the conference that has brought UCLA and three other at-large teams to the NCAA title table.

The game today will be broadcast live on www.uclabruins.com.  And, should the Bruins advance, here is the schedule for the rest of the weekend:

This should be an interesting weekend.  Good luck ladies,