Part Of The Deal (& Keeping Faith)

Share All sharing options for: Part Of The Deal (& Keeping Faith)

This is one of those games that is going to have my stomach tied up in knots all weekend.

Bruins led by the come back of Kahlil Bell gave everything they have ... 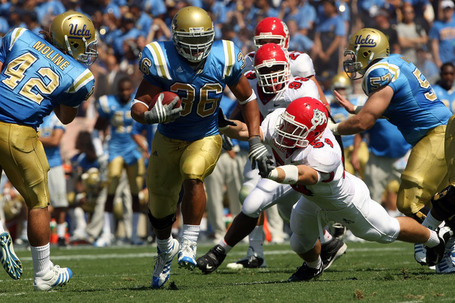 ... but they fall just short, losing a heart breaker to a determined Fresno State team 31-36. Here is the box score and quick AP recap.

I know I am going to think about that holding call in first kick off return all weekend.

I know I am going to think of about that Marlon Moore punt return for TD when not a single Bruin touched him all weekend.

I know I am going to think about two aggressive coaching decisions and about Coleman (who had an amazing afternoon) all weekend and wonder what if.

I know I am also going to think about how the Fresno State offense carved up our D under neath and sliced diced our young defense, and racked up one clock eating (and demoralizing) drive after another.

But you know what ... it is all good. There is nothing fun about close losses. I don't believe in moral victories. But this afternoon's heartbreak hopefully will be an inspiration for this team to work even harder, stick together, and turn up their intensity and focus another notch to come back and get it done next weekend.

I will have lot more on this game tomorrow when I can gather my thoughts. But before I go, I am going to not only urge patience, but I am also going to ask everyone to stop pointing the fingers at our defense. Those kids and coaches have done their fair share of heavy lifting last three years when they had to carry the team. Yes, they had a rough day, but I truly believe it's part of the same growing process for a young team, which the offense has gone through on the other side.

I can see the signs ... of a young team putting it together bit by bit. But it is going to take a lot of time. But that' part of the deal of a rebuilding process resulting from a decade long mediocre (or some would say nonexistent) leadership at the top of the program. We will get there ... but it will take time.

Thread it up my friends and keep the faith.