Let’s build on Class of 66’s post game thoughts because I found myself nodding with most of what he wrote.  Now that I have had some time to think about it and replay the two in game situations (call to for it on 4th and 1 and the decision to accept the holding penalty that put Fresno State at a 3rd and 22), I find myself completely as peace with the decisions CRN made on those two situations.

The bottom line here is CRN played to win. That is my kind of head coach who will always go for it based on calculated decisions. As 66 explained, both of those decisions were well calculated given the circumstances at the time. Kicking it on 4t and 1 would have been the Dorrellian thing to do. And we know what it feels like to play it safe during last few years.

However, that said right now unlike lot of fans who are being rough on DeWayne Walker for the defense’s performance from last three games, I am not all that upset with what is going on. I really believe Walker’s hands are kind of tied given what he is working with. Let me see if I can explain what I am seeing, while watching our defense. From what I am seeing Walker is in a very tough situation.

It’s obvious right now that the opposing offenses are having their way with our defense by carving it up underneath. QBs like Max Hall and Tom Brandstater have simply killed our offense in that proverbial "death by thousand cuts" (a feeling that unfortunately we became familiar with during the Donahue era). It seems like right now they have all the time they need to sit back and pick their targets, and pick apart our secondary. But what can Walker really do? Let’s take a look at our front-7 again.

We have two incredible talents in Brian Price and Brigham Harwell. Those two are amazing and are doing what they can to seal up the middle. And backing them at LB Reggie Carter is doing what he can to fly all over the field. But besides those three, Walker is having a difficult time putting together a combination that can generate sustained pressure on the opposing QB or contain the opposing RBs when they go outside. Right now from what I am seeing it seems like Blake (Senior LE), Hale (Senior SLB), and Korey Bosworth (Junior RE) are having a rough time out there. Steve Sloan, a RS Frosh starting his second game at Mike. It’s not because of lack of effort on any of their part. They are playing their hearts out but right now getting out toughed by the opposing offense.

It is clear right now that this defense is sorely lacking the athleticism, experience and toughness of Bruce Davis, Justin Hickman, Christian Taylor, Trey Brown, Dennis Keyes, and Chris Horton. At this point Walker is in a lose-lose proposition. I can sense why he is reluctant to blitz because he is not sure if his young CBS can lock down the opposing receivers, the same way Brown, ATV, Keyes and Horton were doing last couple of years. While up front Blake, Hale, Bosworth et al are not being able to complement the inside toughness of DTs with, the effective speed rush we saw courtesy of Hickman and Davis from last couple of seasons. Remember those guys – Davis, Hickman, Brown, Horton, Keyes, Taylor – they came along in their junior and senior seasons at UCLA. Growing/developing into effective football players take time at D-1 level. It sucks that the defense of last two years were completely wasted because of the total cluelessness on offense. But there is no need to go over that Dorrellian offense again.

We have had some really tough words for Walker here on BN, especially during the toxic times of Dorrell era, and the campaign for the head coach (when things got heated and emotional after a decade of train wreck). However, folks cannot dismiss how Walker improved the defense from the Larry Kerr era (another Dorrell fiasco). I think Walker is a good DC. He has the potential of being an elite DC if he can show in next two years, his ability to figure out the spread/multi dimensional offenses in college football, using the talent he has brought into our program.  And I think there is a good chance he will develop into one as he will get more and more support from the developing offense from the other side of the ball (which he didn’t get last two seasons), and the new talent matures by next season (hopefully).

For the short term though, I wouldn’t mind if he gives the news guys more chances. One of the bright spots from yesterday was the play of Akeem Ayers. From what I am seeing, it seems like Ayers brings so much more speed and athleticism at Sam LB than Hale. Seems like every time he was lining up he was in the middle of the action. I think it would also be worth pondering whether any of the new cubs – Dye or Hester – would be better options than Courtney Vinney. Again from what I was seeing, it seemed like Vinney was having a "rough" time. This was not the first time Vinney was struggling. It has been a pattern since the Tennessee game. Same goes for our safeties. I think if Lockett doesn’t step up in next couple of weeks, it might be worth considering starting our other young safeties, getting them ready for next season. We will see how they come out and respond against Washington State next weekend.

On to some of the great positives from yesterday. There were lots of them. Here are just some, I jotted down while watching the game:

So there we are. That’s what I have for now. In some ways this am, I am not as down as I was following the Arizona and BYU game. I still think there is a good chance (a very good one) that this team is going to struggle rest of the season and end up with 3-9 record or something worse, given the situation described re our defense. I am not sure we have the horses to win shootouts after shootouts. However, what I am more than encouraged from last three weeks is that the team overall is moving towards positive direction. Now if it can take care of business against another desperate team (which it has a very tough time with in recent years) next weekend, it will give us more reasons to hope to keep moving towards the positive direction rest of the season.

Here is to HOPE: 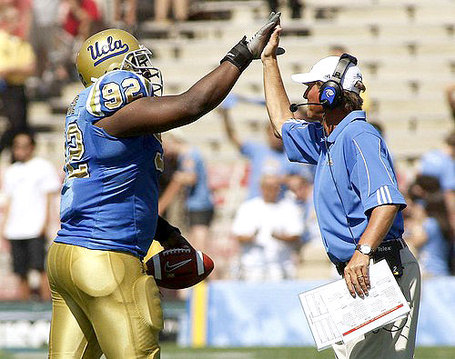 We have seen enough to keep us charged with it rest of the way.