Tough Being A Ben Ball Warrior

Share All sharing options for: Tough Being A Ben Ball Warrior

JF is back on the Lakers bench as he is busy rehabing so that he can get back in time for hopefully a title run and a revenge meeting with the Celts. Meanwhile, in his freetime JF is doing a little blogging over at Playboy.com. I will skip all the joke about hey I only go there for the articles. Anyway in JF's last post he penned the following thoughts on what it takes to play defense for Coach Ben Howland at UCLA:

UCLA is known for its traditional aggressive play on defense.  One key element of coach Ben Howland's successful philosophy is pressure on the ball. He's a big believer that the first line of defense is pressuring whoever has the ball, giving your teammates time to negotiate screens. For instance, if your guy, the one you're guarding, sets a screen, you have to jump out on the ball-handler until your teammate fights through the screen, then you got to get back on your man, so you don't let the ball-handler just pick out whoever they want to pass to whenever they want. You want to put them under duress, so they have to take a split second longer to make decisions. You want to take them out of their comfort zone.

And then JF also wrote how life off the court can be for a Ben Ball warrior:

UCLA has a lot of beautiful girls, including their cheerleaders. And female fans' attention is part of the life on campus, and it's all good. You're young, you're doing what you love and you get attention from girls and everyone else, 'cause they all know who you are. So it's nice when girls give you that attention. But sometimes, the girls and fans can get a little pushy. You know how I am, I'm real low-key. I moved off campus my second year, so I'd just go to class and practice. It's not like SC where you could be around a lot of kids who are living on campus, all the time, as opposed to UCLA where a lot of kids are commuters and so there's not a lot of kids you see all the time.

Groupies are always part of campus life and it's something you have to watch out for. Girls used to come to our dorm room all the time, knocking on our door, leaving off notes and propositions. I was rooming with Josh Shipp, who's still on the Bruins team. When we came in, we were all playing, all young, new on campus and girls would come in wanting to see you. They know all your stats, your personal info, where you're from, they've Googled you. It's crazy how they know you in and out.

And you get some invasion of privacy, like I said, they're knocking on your door, all the time. There's no secret where you're staying when you're living on campus. Most freshman and sometimes sophomores stay on campus, so they're the ones getting hit on. Hey, if that's what you want, that's cool. But as you get older, as things get more serious about a possible pro career, you move off. Until then, there's notes and cards under the door, gifts, Valentine's Day-grams, all kinds of stuff. Girls in the stands are wearing your jersey with writing asking you to marry them. Anything you can think of, it happens.

Thanks so much for spelling that out JF. That sounds really rough for a college kid at UCLA.I mean we are just shocked to read about this. Shocked: 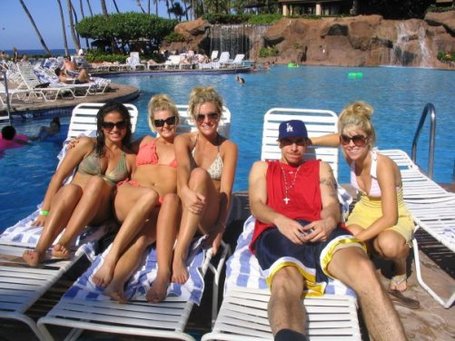 A mega hat-tip to Insomniac Lounge

I imagine this will give recruits a pause before signing up to punch their NBA tickets as a Ben Ball warrior.