Share All sharing options for: CRN Reels In Four Recruits

With 14 recruits on campus for official visits (eight of which were already committed to UCLA), CRN had a chance to bolster an already strong recruiting class and that's exactly what he did tonight. The weekend isn't over yet, but CB Marlon Pollard, TE/DE Bill Sanders, OL Nik Abele and LB Taniela Maka have already jumped on the Bruin bandwagon by committing to UCLA tonight.

Marlon Pollard is considered one of the nation's top cornerback recruits who originally committed to UCLA, but switched his commitment to Notre Dame before switching back to UCLA tonight. Pollard goes to Cajon High School in San Bernardino and is the Bruins' third CB, joining Brandon Sermons and Sheldon Price.

Billy Sanders, out of Coeur d'Alene, Idaho, was originally committed to Miami (FL), but has expressed interest in the UCLA School of Film, Theater and Television of late and made the switch when his grades were okayed. Sanders could play either tight end or defensive end, but most expect him to play defensive end in Westwood.

Nike Abele addresses one of the Bruins' most pressing needs as the offensive lineman has signed up to learn from Coach Palcic. Abele, out of Irvine High School, has offers from nearly every school on the west coast and his strong performances this season as a senior made him one of the west's most sought after offensive tackles. Edit- According to Dohn, Abele will actually switch positions and play defensive end at UCLA.

Now only two recruits on campus haven't committed to the Bruins. The two are USC wide receiver commits Randall Carroll and De'Von Flournoy. The weekend isn't over yet so hopefully we can reel in one or both of them, but either way, CRN is on a roll. How did CRN turn undecideds and other schools' commits into Bruins? Dohn got an answer.

I talked to Marlon Pollard and Billy Sanders, and both talked about the four commitments UCLA received tonight. They said it took place during a get-together at coach Rick Neuheisel's house, and both said the energy and work Neuheisel is doing was inspiring to them.

How can you not be excited about the future of the program? 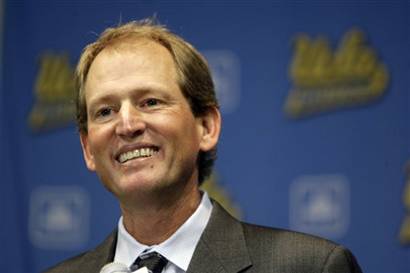