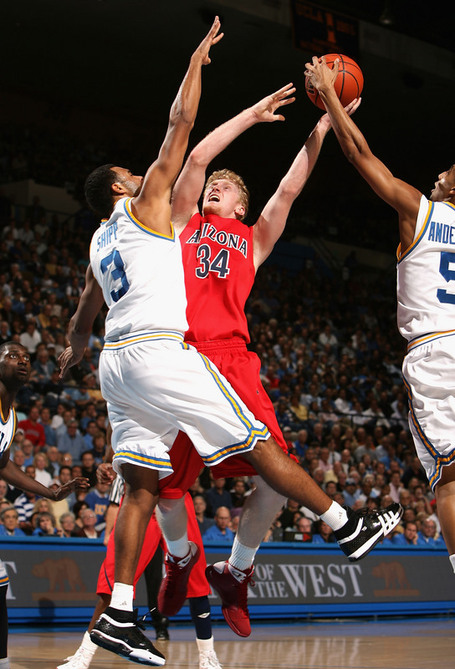 I could just make this picture the postgame thread, and it would probably be satisfactory, but since the Cats were gracious enough to give our guys bulletin board material prior to the game, talking about how they want SO BADLY to win in Pauley, a little more commentary is necessary.

The Cats came in the desperate team, throwing all manner of defenses at the Bruins to try and slow them down. Unfortunately, none of them proved very effective, as the Bruins wiped out the Wildcats 83-60 (box score).

So many guys played well that it seems unnecessary to even choose a player of the game. Aboya was overmatched inside on paper, but came down with key rebounds, often dominating his matchup with Jordan Hill on the glass to pull down 11 rebounds to go with his 12 points. Josh Shipp started off the game hot and set the tone early on his way to 13 points, and 3 3-pointers. Senior leadership came, as expected, from DC with 12 points including 8-8 from the stripe. Roll again demonstrated his range, and Nikola Dragovic went 2-2 from 3 to set a career high of 15 points in the rout.

We talked about how rebounding was key, and the Bruins beat the Cats on the glass 30-23. Shooting 60% and holding your opponent to 43% will definitely get it done. Jordan Hill had a fantastic game for UA, going 10-15 for 22 points, but he found his supporting cast lacking, including Chase Budinger, who had the quietest 6-12, 14 point performance I've ever seen. Great job by Shipp and Holiday in holding him down. Great team defense took care of the rest of the supporting cast.

So for whoever is still out there tonight, looking for their basketball fix, this is your late night Standard Shutdown postgame thread.