I still have to go back to a discussion we had a little earlier in the season about whether we are having fun this year given the fact this year’s team didn’t come into the season with the kind of expectations that were around the one around last year? We had a discussion about whether people are having fun watching a young team gel, grow and develop an identity while rest of us remain unsure about how far they can really go rest of this season.

I also want to go back to the Michigan post game thread earlier this season when several drive by commenters (who don’t usually participate in the discussion in this community) came by to whine and complain about Coach Howland’s offense and bloviated about the offensive adjustments he supposedly has to make despite the track record he has compiled as the second most successful coach in the history of UCLA basketball: 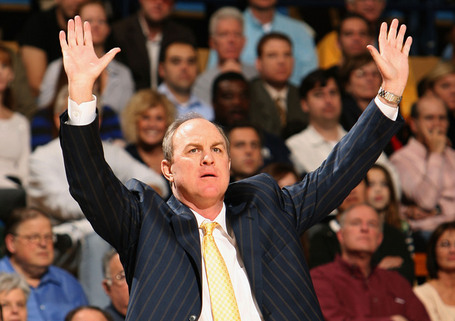 Then of course there are all those usual whines about scheduling as we routinely have to hear how Coach Howland is not putting together an exciting schedule for some people’s personal enjoyment at Pauley.

So with that context in mind I’d like to hear if there is anyone out there who is not enjoying what has been methodically transpiring infront of our own eyes this basketball. Ben Ball warriors offered up another standard beat down of Arizona last night in the house that Coach Wooden built. Last night was FUN. What was most fun for me was to watch the ball movement. Coach Howland was happy:

"We did a really good job of attacking their zone, making the extra pass," Coach Ben Howland said. "I thought there was some really nice passing going on."

That translated into an efficient offense, the Bruins shooting 59.6% from the field with five players scoring in double figures. A struggling and unranked Arizona team couldn't keep pace and lost to UCLA for the eighth time in a row. "We did a really good job of attacking their zone, making the extra pass," Coach Ben Howland said. "I thought there was some really nice passing going on."

Just how efficient were the Ben Ball warriors? From Brian Dohn:

This was a total team win. Some more fun numbers and poignant comment from Coach Howland in the LA Times:

Dragovic, getting his second consecutive start, led the Bruins with 15 points. Shipp had 13. Collison, Aboya and Roll had 12 each, with Aboya grabbing 12 rebounds for the first double-double of his college career.

"We have a team where anybody could go off and get 20-plus points," Howland said. "When you have that kind of balance, it really is hard to defend."

I thought the whole team was sensational last night. I mean really. I don’t want to praise ND too much. I am afraid to jinx him any way and get him tooo comfortable. Yet last night was probably his best game as a Ben Ball warrior. It’s clear now that he is more confident in his defensive abilities he is looking less hurried on the offensive side. I also get the feeling watching him that as he has developed the mentality of going inside to look for points, it is settling him down around the perimeter. He is playing without the desperation vibe that came off his game last two years when everytime he came in he was immediately looking for those easy threes. Instead he is now looking to pick up points around the paint, developing an inside-outside game.

Exact same thing is happening with MR too. MR has been increasingly taking it to the rack as other teams are respecting his outside shot. It’s beautiful to watch how our wings are attacking the zone. They are not settling for the easy jump shots any more. They are making that extra pass and looking for opportunity to attack the rim. What I am seeing from this team right now is the potential to develop into one of the most fun UCLA offenses I have seen in my life time. They are not there yet. But you can see the signs.

Then again it kind of goes back to Coach Howland. DC directly credited CBH’s scheduling as one of the main reason Ben Ball warriors have lately looked so prepared against zone defenses:

"I thought our play against the zone was really good," Collison said. "We've been playing (against zones) for the last two or three months, and by now we should understand how to beat a zone. Whatever they throw at us, we should know how to attack it."

So just keep this in mind when we hear some newbie on BN whine and moan about Coach Howland scheduling some mid-major team at Pauley.

Going back to DC I am not sure what can I add this point to praise his game. He is playing at a different level. At this level he is starting to get to the point where he is becoming more than just a basketball player. He is turning his game into art. It’s just pretty to watch how he is conducting this offense. He is deadly from the outside, smooth driving through the lane. Allright … I get the fact that he has now gotten stuffed two our of last three games when he tried to dunk. lol But does it really matter? He gets fouled and basically gives us more free points. He is also taking his team-mate’s game to whole another level. That goes back to the emergence of MR and ND as scoring threats (both from inside and out). Teams now just have way too many poisons to chose from when deciding how to stop this Howland offense.

Speaking of weapons JS continues to step up. His block at the middle of the second half was spectacular. He also jump started our fast start by connecting from long range. Josh was smooth and efficient. I also love DC and JS running the floor on our fast breaks. You can sense the chemistry between these two seniors. Again, I haven’t sense this kind of chemistry since the senior days of Tyus and Ed. I am relishing every moment of it.

Yet despite all the talk about our offense, as CBH mentioned it started with our defense. It started with the defensive pressure our guards were putting around the perimeter.  It was interesting last night. Jordan Hill went off against us. We thought he’d be a huge key for the Zona. He was fairly unstoppable at times scoring 22 points, shooting 10 out of 15. But that was it. The rest of his team-mates went 14 out 40 shooting 35%.

Hill’s offensive exoplosion didn’t matter much at the end. I didn’t think AA2 and rest of our front court played soft inside. AA2 was anything but. As tele described properly he was an "animal" notching the first double-double of his storied (storied in my book) career as a Ben Ball warrior. He was relentless around the boards. So was DG and JK had some decent moments as well. It was just that Hill is an incredibly talented athlete who had a great individual night while the Ben Ball warriors collectively put together another total team effort.

Speaking of our team, I have to go back to the infamous Nic Wise comment about beating us in Pauley from about a month ago. When that comment was fanshotted and frontpaged here on BN, there were some disagreements about whether it was standard trash talk we have gotten used to from Tucson. Well looks like there was no disagreement from a motivated DC:

They seemed particularly enthusiastic entering the game against UCLA, with guard Nic Wise telling an Arizona newspaper in December: "That's one thing we focus on every day in practice -- Pauley Pavilion."

Said Collison of the bulletin-board material: "That's really what motivated us to play real hard."

And a fired up JS who went out there with the mindset of proving a point:

Wise did not help Arizona in this matchup, scoring five points on 1-of-8 shooting.

"You try not to say things like that to get other teams motivated," Shipp said. "That was extra motivation for us. We definitely wanted to go out there and prove a point."

Hopefully JS, DC and rest of their team-mates will come out with the same mindset on Saturday afternoon against an ASU team led by superstars Hardin and Pendergrpah that many believe will be unseating UCLA as the champion of Pac-10 this season. Those guys will come into Pauley wounded and desperate after a tough loss against the Trojies.  Let's hope our warriors continue to prove a point: 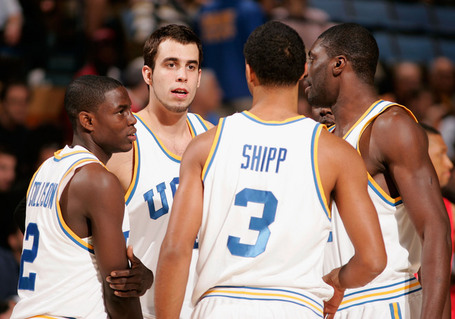 The question I will throw up for you meanwhile … are you having fun?