Share All sharing options for: Ben Ball Warriors Cruise To A Convincing Win ...

Well that was a fairly decent start to the Pac-10 season.

Ben Ball warriors came out on fire to start the Pac-10 season blitzing the upstart and inspired Beavers bunch with a 19-4 run out of the gate. Since that hot start the Beavers never made it close as the Bruins put together a dominating 37-16 first half with an air tight and suffocating defense, crisp/patient and aggressive offense: 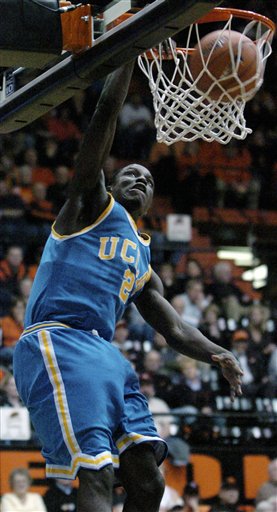 JH started off his first conference game of his Ben Ball career on a good note finishing the night with 9 pts, 3 rebounds and 2 assists. However, the stars of the night were DC and MR who led the team with 16 pts each. MR was perfect from the 3 pt line going 4 for 4 while DC was in total command as the team's floor general while playing the role of lead catalyst a number of times on defense leading to fast break points.

Still it wasn't a perfect night despite a great start. I am sure Coach Howland will talk to the team about the second half during which we looked at times unfocused on defense and out of sync on the offensive side. We can't let down on the intensity level to start the second half during rest of the conference season. I will try to write more about this tomorrow.

BTW I think Tracy Murray just gave a shout out to "Ben Ball warriors" on the Bruin post game show. Thanks for reading us TM.

We will have more analysis later and focus on Oregon. Remember our mantra here on BN: one game at a time.

Anyway, the court is all yours. Take it away in this post game thread.