Bruins Squeeze Out A W In The Palouse

Share All sharing options for: Bruins Squeeze Out A W In The Palouse

It wasn't always pretty and it certainly wasn't comfortable, but a Pac 10 win is a Pac 10 win and when you can pick one up against a quality team on the road, there isn't much to complain about. 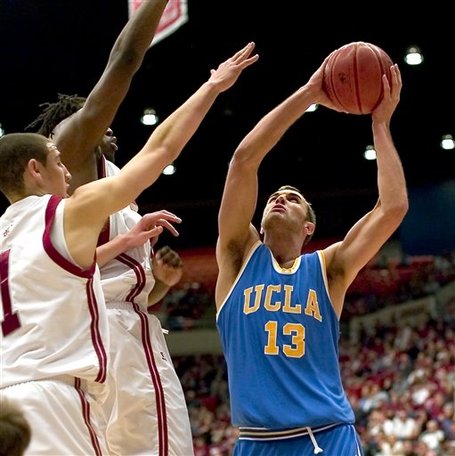 After building another big second half lead, the Bruins had yet another scoring drought (although not nearly as bad as Saturday's), but the seniors came through when the team needed it and the Bruins eeked out a 61-59 win (box score).

DC was only 3-8 from the field for 8 points, but he hit two free throws late and a rainbow to keep the Cougars from getting the opportunity to tie the game. AA2 also came up huge in the clutch, hitting two free throws of his own on one end, then swatting a shot fro Rochestie on the other. While the seniors were the key late in the game, it was the much maligned junior Nikola Dragovic who was the star in the first half. Dragovic had 6 first half 3's to lead the attack as UCLA built a 13 point halftime lead.

The Bruins had rebounding issues early on when they allowed Wazzu to get 7 offensive boards in the first 10 minutes, but they cleaned it up and WSU didn't get another all game long. The team finished only 6-10 from the line and didn't get the ball inside as much as some would have liked so there are certainly improvements to be made, but it's a road conference win over a quality team in a hostile environment. Those don't come without a fight and the Bruins clawed their way to one tonight.

While the Bruins got their W today, the two other teams who entered tonight tied with us atop the Pac 10, Washington (vs. USC) and Cal (vs. Oregon St.) are still playing so there's some more basketball of interest going on tonight. This is your Ben Ball Warriors postgame thread so for all you Bruins still out there, have at it.