Can't Take The Easy Way Out

Share All sharing options for: Can't Take The Easy Way Out

Bruins go down against the Huskies in Seattle ... AGAIN. They came out firing getting off to an early lead thanks to hot shooting from JS. Despite a Husky rally they held on to one point half time till the Huskies took control and put the game away in second half. Here is the box score if you want to browse through.

Now I feel everyone's frustrations with the SPTRing we saw in this game. I really do. I watched every minute of this game even though I was away from today's game thread. But we have to be honest with ourselves. We didn't lose tonight because of questionable and inconsistent calls from SPTRs. That excuse doesn't work. At least not for me. We are not the only victims of SPTRs. These clowns victimize every other team in the conference. But blaming our loss on them is taking the easy way out. I can't do that.

IMHO the main reason we lost tonight because the Huskies WANTED it more. They are the ones who adjusted to the SPTRS and more importantly attacked and executed on offense while taking care of business on the defensive end. Sure Romar, Dollar being the former UCLA assistants they are somehow get their troops fired up for this game every year. They were inspired and played with determination all afternoon long. So hats off to them.

For us ... the question for everyone in our team ... including the seniors who have had to take over leadership roles from Ben Ball legends such as AA, LRMAM, JF, and RW, and the talented freshmen who have come in with the lot of hope ... the question becomes ... how badly they want to play like prototype Ben Ball warriors and show that lockdown determination on defense, leading to so many clutch wins over the years.

They can't take the easy way out by knocking down pretty jumpers from the three point line. They have to attack the rim and attack on defense playing the kind of on ball defense AA and RW made legendary during their times as Howland coached warriors. I haven't seen that from this team yet. Oh I believe they will get there eventually. And I am enjoying watching this team grow up: 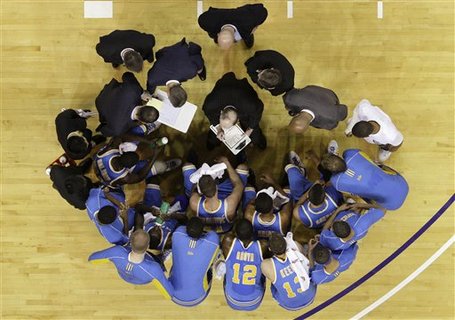 Yet, I hope the veterans and talented freshmen in this team understand and appreciate how their recent predecessors stepped. They did it the hard way. They didn't do it by shooting smooth jumpers. They did it by playing DEFENSE FIRST and attacking the rim on the other ends of the court. They did it by imposing their will on their opponents with their defensive intensity.

For this team to live up to the standards of previous Ben Ball teams, they have to stop worrying about defending a Pac-10 championship and instead focus on playing smart and start ATTACKING on both sides of the court.  They need to want "it" more than the other team. Can they do it? Guess we will find out on Thursday night. I have more notes from today which I will put up sometime tomorrow. For now though I think this team needs to realize it can't take the easy way out.