No miracle shots necessary this time.

The Bruins start things off on the defensive end pressuring the Bears into turnovers and mostly staying in front of their guys. Although the Bruins also started out somewhat sloppy on their offensive halfcourt sets, they were able to get out on the break due to all of their steals, and went into the break with an 8 point lead. The Bruins then had a 20-2 run in the second half to put the game away early before cruising to an 81-66 victory (box score). 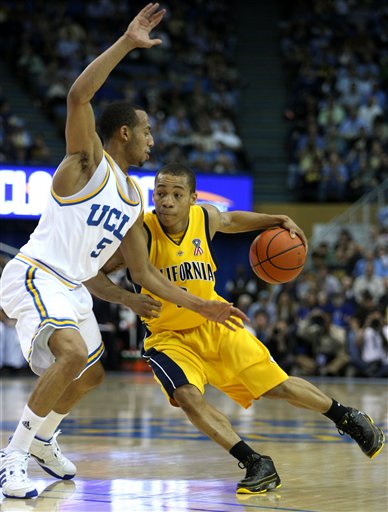 DC was aggressive early, in the middle, and late in the game, constantly getting to the rim and giving himself FT opportunities to wind up with 20 points. Holiday and Shipp also chipped in with 11 and Roll and Aboya had 10 each to put 5 guys in double figures tonight. Another encouraging sign: 21-23 on Free Throws. While Drago had some miscues, he also displayed a lot of aggressiveness on the boards and was often seen diving on the floor for loose balls. That's the kind of all around effort we are going to need down the stretch.

The Bruins now find themselves again tied for first in the conference after a wild night in Arizona.