This homestand against the Bay Area schools is turning out to be the complete opposite of last year's. Last year's edition of the Bruins used a miracle shot by Josh Shipp to secure the win over Cal, and a controversial call to beat Stanford at home. No such drama this time.

This afternoon, the Bruins busted open a 20-all tie in the first half utilizing the playbook they showed against Cal: Stingy perimeter defense, strong recovery interior defense, and cutting to the basket. They then added the 3 point shooting that had abandoned them last week, making 10 out of 16, and 63% overall while holding Stanford to 38% shooting on their way to a 97-63 rout of Stanford at Pauley (Box Score).

Fantastic effort all around on both end of the floor. Whether it was Holiday Shipp recovering on defense to swat away a point blank Cardinal attempt, or quick and vicious hedging and trapping by our bigs on the perimeter, the Bruins appear to have rededicated themselves to that end of the floor. Hopefully this is a sign of things to come going into the second half of the conference schedule. 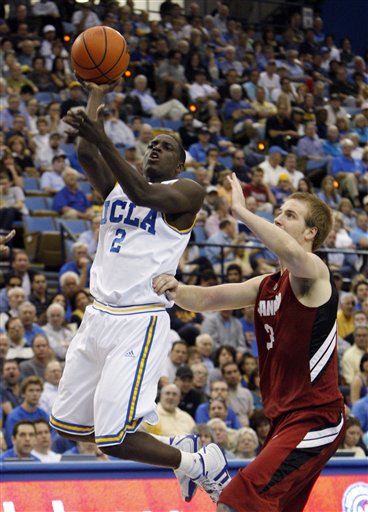 On offense, the cutting, screening, and quickness of guys like DC was too much for the Stanford guards to handle. The Bruins were allowing their penetration to set up both their outside and inside shots with deft passing cutting up Stanford with 21 assists. Holiday, DC, and Aboya all led for team high honors with 15 points. Once again, Aboya continues to impress with his relentless hustle. Holiday continues to make his moves look effortless, and DC was again decisive in getting inside for a variety of floaters and flip shots. We also got to see a very encouraging glimpse of the future, as each of the freshmen had some great plays in extended garbage time.

If CBH had problems thinking of things he didn't like about the Cal game, he will surely be scraping the bottom of the barrel after this one. So much for "bad offense". If the Bruins can improve over the rest of the season the same way they improved this past week, we could become the team that no one wants to face come March. It's all about continuous improvement, and I have faith in CBH that he knows how to get it done.